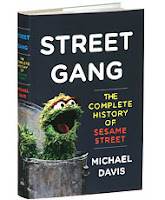 How Oscar Got Grouchy
By MICHIKO KAKUTANI writing in The New York Times, January 15, 2009
STREET GANG
The Complete History of Sesame Street
By Michael Davis
Illustrated. 379 pages. Viking. US$27.95.
Recent DVD collections of early “Sesame Street” episodes were called “Old School” and came with a peculiar warning: “These early ‘Sesame Street’ episodes are intended for grown-ups, and may not suit the needs of today’s preschool child.” That warning is a measure of how the series has changed in the nearly four decades since its debut in 1969. The old episodes not only have a handmade, anarchic charm that underscores the show’s debts to “Laugh-In,” the Marx Brothers and vaudeville, but they also are blessedly free of the uptight, sunnily upbeat, politically correct tone that has crept into more recent incarnations.
Back in the day, Oscar the Grouch was really grouchy (never mind that anger isn’t considered constructive), Cookie Monster really gobbled down cookies (never mind that empty calories aren’t healthy), and Big Bird’s invisible friend Snuffleupagus was really invisible to everyone but Big Bird (never mind suggestions that the giant yellow bird might have been hallucinating).
Read the full piece at NYT online.
Posted by Beattie's Book Blog at 7:50 am