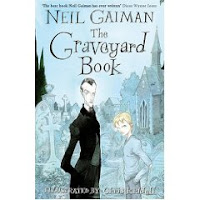 More about the Newbery Medal winner:
The Graveyard Book’ Wins Newbery Medal
By MOTOKO RICH writing in the New York Times, January 26, 2009
Neil Gaiman, a renowned author of science fiction, fantasy, graphic novels and comics aimed at adults, won the John Newbery Medal for the year’s most outstanding contribution to children’s literature on Monday.
Beth Krommeswon the Caldecott Medal for her art in “The House in the Night,” below, by Susan Marie Swanson.
Mr. Gaiman, 48, won for “The Graveyard Book,” a story about a boy who is raised in a cemetery by ghosts after his family is killed in the opening pages of the novel. In announcing the winner of what is widely considered the most prestigious honor in children’s literature, the Association for Library Service to Children, a division of the American Library Association, cited Mr. Gaiman’s work for its “delicious mix of murder, fantasy, humor and human longing,” noting its “magical, haunting prose.”
The association, which conferred the medal at its midwinter meeting in Denver, also awarded the Randolph Caldecott Medal for the most distinguished American picture book for children to Beth Krommes, who illustrated “The House in the Night,” a book written by Susan Marie Swanson.
Speaking by telephone from Los Angeles, where he had been doing press interviews for the forthcoming film adaptation of his first children’s novel, “Coraline,” Mr. Gaiman said he was stunned by the award, partly because the book had already found a popular audience.
“The Graveyard Book,” published by HarperCollins Children’s Books, has spent 15 weeks on the New York Times best-seller list for children’s chapter books.
“I had thought that’s nice, there are books that are best sellers and books that are winners,” Mr. Gaiman said. “Very often, the world of award judges, and I think rightly, use their magical judging powers to try to bring books to the attention of the world that might not have otherwise been noticed.”
The selection of Mr. Gaiman’s book, which has already sold 71,000 copies, according to Nielsen BookScan, which tracks about 70 percent of retail sales, would seem to reverse a trend of the past few years when critics accused the Newbery committee of selecting books that had a tough time finding an audience among children.
The full piece here.
And link here for The Guardian coverage.
Posted by Beattie's Book Blog at 6:43 am

We're all talking about it, it would appear. I find it curious that this is getting so much attention. Not that I have a problem with it, obviously (that would be slightly hypocritical). The last couple of books have been strictly in-the-box picks. I guess the moment there's something vaguely different, it gets attention. Or I haven't been paying attention all these years.