After 90 years, Pooh returns to Hundred Acre Wood in sequel
Alison Flood writing in The Guardian, Saturday 10 January 2009
He might be almost 90 years old in real terms, but Christopher Robin and his bear of very little brain are set to make a literary comeback after the estate of AA Milne agreed to authorise the first-ever official sequel to the much-loved children's books.
Re 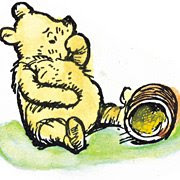 turn to the Hundred Acre Wood by author David Benedictus picks up from the poignant ending of Milne's last Pooh book, The House at Pooh Corner, in which Christopher Robin is growing up and heading away to school. "Pooh, promise you won't forget about me, ever. Not even when I'm a hundred," he tells the bear, and they leave together.
Read Alison Flood's full story here.
Footnote:
The Bookman has established that It will be published in Britain by Egmont Publishing and in the U.S. by Penguin imprint Dutton Children's Books.
The new book is written by novelist and playwright David Benedictus, who has adapted several Pooh stories for audio CD, and illustrated by British artist Mark Burgess
Posted by Beattie's Book Blog at 2:25 pm