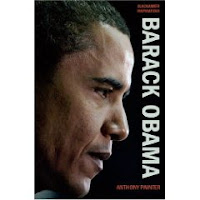 10,000 1ST UK PRINTING OF BARACK OBAMA: THE MOVEMENT FOR CHANGE SELLS OUT DAY AFTER INAUGURATION

ARCADIA BOOKS is delighted to announce that its first UK printing of Anthony Painter's BARACK OBAMA: THE MOVEMENT FOR CHANGE (10,000 copies) has sold out the day after the Inauguration, with a further 500+ dues recorded today.
A further 10,000 copies of the book were printed in Australia, for the Aus/NZ market, and the book is performing very well there also.
A UK reprint is in hand, and the Italian edition follows next week, to be closely followed by the Japanese edition.

In the past week, Anthony Painter has done 25 TV and radio interviews, as well as a number of UK author events, which are ongoing.
Yesterday, in Westminster, he gave a talk to about 250 research assistants to Labour MPs - astonishingly young - and a sprinkling of Labour MPs, including the ever-youthful Ben Bradshaw MP, after Obama's inaugural speech.

Posted by Beattie's Book Blog at 7:07 am