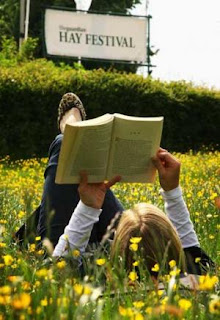 The Battle of Hay-on-Wye
Is the festival ruining Britain's premier town for secondhand books?
Andrew Johnson reports in The Independent , Sunday, 25 January 2009
An uncivil war has broken out in the small but internationally renowned book town of Hay-on-Wye on the Powys-Herefordshire border. Pic - Getty Images.
The booksellers who put the town on the map 30 years ago are angry and fearful at collapsing sales, and are pinning the blame on the festival, which began 25 years ago, on the internet, and now on each other.
The chief culprit, to their minds, is the self-styled King of Hay, Richard Booth, who is credited with starting the whole Hay phenomenon and who used to run one of the town's biggest book dealerships.
Mr Booth, they say, is no longer capable of attracting the publicity the town needs, nor of challenging the festival which, they argue, has become a corporate monster with sponsorship by Sky and The Guardian. They argue it sucks up the thousands of tourists who used to browse in the town's second- hand book emporia but now no longer visit except to park their cars.
In response, the rebels have been condemned as "parasites feeding on [Booth's] success" by his loyal bookkeeper Eve Redway.
The dealers are, however, facing real concerns. Paul Harris, who runs the antiquarian shop Oxford House Books, said some have seen their trade fall by 50 per cent over recent years.
"You can fill a town with books, but that won't bring people to the town," he said. "You need publicity and promotion, which is now all sucked up by the festival. Richard used to be great at drumming up publicity and denouncing the festival. He's not able to do that any more, so we need to set up a council to replace him."
Read the full piece at The Independent online.
Posted by Beattie's Book Blog at 9:16 am