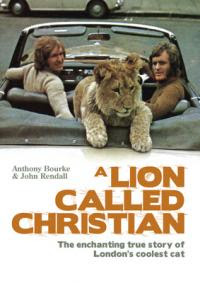 Now I suspect I must be the only person in the universe who didn’t see this adorable YouTube www.youtube.com/watch?v=HjWtRYaxmWM) clip last year.
It was the most-visited YouTube clip for 2008 (44 million!) .
The two-minute film clip, that became an overnight phenomenon, shows the remarkable, highly moving reunion of two men and their pet lion, Christian, after they had left him in Africa with Born Free’s George Adamson, who would introduce him into his rightful home in the wild.

I thought you might like to put it on your blog possibly with New Year’s greetings to everyone from me. Doesn’t it just make your heart sing?
We’re reissuing a fully revised and updated with stunning photos, the classic, A Lion called Christian, in April.

The book tells the back story of how John Rendall and Anthony ‘Ace’ Bourke, visitors to London from Australia in 1969, bought a boisterous lion cub in Harrods for 250 guineas. For a while, the three of them lived together as flatmates in a furniture shop in the King’s Road, Chelsea, where Christian quickly became a local celebrity. But the lion cub was growing up, fast, and even the walled church garden in which he exercised wouldn’t be big enough for him for much longer. How could John and Ace avoid having to incarcerate him in a zoo for the rest of his life?

It was thanks to Virginia McKenna and Bill Travers, stars of Born Free, who dropped into the shop, that Christian was subsequently flown to Kenya and placed under expert care of Adamson.
Footnote:
Thanks Jennifer, yes, it certainly does make your heart sing. Imagine that, 44 million hits on You Tube. Amazing, but when you watch it you can understand why.
Posted by Beattie's Book Blog at 10:26 am