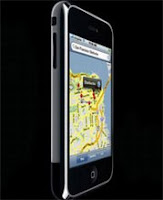 iPods and iPhones: death for the book trade
By Gareth Powell

The Apple iPod Touch and the Apple iPhone will all but destroy traditional publishing. It is already very sick. The days of the major sales when you would print a million of a book and know you would be OK are now well over.

The death of book publishing in the middle levels may not happen tomorrow. The relatives have been informed. It is awaiting the last rites. Probably within ten years.

This is written in the first person for there is no other way to write it. John Owen is one of the savviest publishers I know. He owned Weldon Owen — he bought out the Australian Kevin Weldon — and from his headquarters in San Francisco and Sydney built up, in partnership with his wife, Dawn, a major publishing empire. Which he recently sold.
He is visiting Sydney and last night took me to dinner.

The conversation was all about the death of publishing in the middle levels. It survives in other areas but the glory days are well past.
The easiest way to see why and how it is happening is iPod the Missing Manual by J.D. Biersdorfer and David Pogue.
At the bookseller Dymocks in Sydney it is US$27 although in the United States it is US$20. It is 278 pages long, has a laminated cover, is professionally laid out. Not great value for money but OK.
It was also available as a download on the official Apple site as:
iPhone: The Missing Manual, 2nd. Ed.Thoroughly updated and teeming with high-quality color graphics, humor, tips, tricks, and surprises, iPhone: The Missing Manual quickly teaches you how to set up, accessorize, and troubleshoot your iPhone 3G.
Price was US$3.50 on special.

Read his full sobering report at BLORGE.
My thanks to Perry Lennon of Dymocks Australia for bringing Gareth Powell's story to my attention along with another story from Publishers Weekly offering a similar scenario in the cookbook world.
Posted by Beattie's Book Blog at 11:03 am

We Wellingtonians bus a lot, and I find that we fall into two categories. The techy folks are listening to music, texting and following Morning report – certainly not reading screen after screen of Jane Austen. The rest of us have our trusty dog-eared paperbacks and public library novels.

I'm with you Gavin, an overly pessimistic report, and it is hard to imagine people not reading on buses and trains, and in bed, and at lunchtime in the park and a host of other places.
Interesting to read in the Herald this am that the new northern busway has seen an 86% increase in bus patronage. Long live the book!

I'm sure we will see what I call "the relative displacement of media" phenomenon.

Since the beginning of time, the invention of each new medium has never destroyed the preceding media, it has simply displaced them. Even today we chisel words in stone on monuments and attend public addresses by academics, politicians, etc., make our own music at home, attend live performances, paint, sculpt and so on. So media do not disappear.

However displacement is not absolute. It is relative to all other media. Just look at what TV did to the cinema. At first it knocked the cinema into steep decline. Then the cinema industry remade itself, found new production values and marketing techniques and is today stronger than ever. Cinema in its time had done the same to live theatre and recorded music to home-made musical entertainment. And yet each displaced medium has bounced back, stronger than ever.

If for no other reason than the lesson of history, we can confidently say that the traditional print book will:
- be displaced by eBooks
- suffer some decline in print form
- after a time redevelop its format and values
- piggyback on the new medium to reassert itself
- emerge stronger than ever

By the time you finished paying for your paper and especially computer ink to print out a 278 page book, it would cost a lot more than $3.50.
But if people in future do opt for hi-tech over paper, it will be because they prefer it. Noone's going to coerce us into it.

It is a very interesting topic; in fact I had a conversation with someone about it just the other day. It is certainly a risk to the middle range books and novels but I hope that unlike CDs that books won’t become obsolete for so many reasons…

They are tactile, nothing quite like folding the pages back, getting sand on them at the beach and passing a well loved book over to a friend (a digital file just doesn’t have the same presence). Also imagine the number of people with bad eyesight there is going to be out there, it is terrible how looking at a computer ruins your eyesight and I hate having to read from a screen, I always have to print something out to read it. I must say my comprehension, grammar and writing skills don’t seem to function so well on screen but perhaps the next generation have adapted and are used to working in this way…

And if we do look at music as a guide it is interesting to see that many of my friends are reverting to records and have major collections. I really do hope that the digital technology does not take away only books and music but film photography also as these are some of my most treasured things.

Change, it can be a blessing and a burden…

Love him dearly, the old Gareth, but he's a ratbag of the highest order. Yesterday's man. And John Owen was never a publisher, but a packager, albeit a shrewd one !

As the owner of a Sony e-reader I have to disagree with John Owen.
It is slower than flicking through printed pages and much harder on the eyes.
It lacks the stylistic elements of the book: the paper, the typography, the smell of the glue and the cover – all contribute to the reading experience.

I will concede that e-readers are incredibly useful for travel. Oh the joy of 30 books on a plane trip in a very light format, not taking up bag space and weight allowances and so easily accessible.”

How interesting to be called a 'ratbag' and 'yesterday's man' by some who hides under Anonymous. I know of no such person. Nor would I wish to. Yesterday may indeed be true but I have published nearly fifty books in the past year, am rewriting another and write ten blogs.
I am not sure what anonymous does apart from skulk away from his own name. Possibly something to do with Onan.
John Owen owned Weldon Owen. Yes, he was a packager and what often sells a book is packaging. He produced some great books which were, not, by any stretch of the imagination, packages. Unless you could a historic coverage of the Yellow River in China as such.
I am totally impressed with people who hide under Anonymous. Possibly because then have something to hide.
There is a point about reading books being a more satisfactory experience, and it is good one. But it is age related. If people send and read dozens of text messages a day -- and they do -- their relation to the word comes to be a screen rather than paper.
The figures on book publishing -- simplifying like made -- is that more and more books are being published for less and less sales per title. And that screen read books will at some time -- your guess is as good or better than mine -- eat a way a major part of the market. This is not original thinging. It is in The Long Tail by Christopher Anderson.
As for anonymous, as a Buddhist I can tell him his next rebirth will be a flea in the anus of a dog.

gazza34- I think my comment about my niece (who is 15 by the by) undercuts completely your comment about age-related reading patterns...

let's all acknowledge that the actual number of literate humans who read-for-pleasure (as in books, with no - even vaguely - satisfactory electronic substitute anywhere in sight) is about 10%. That figure hasnt actually changed for many many decades.

Publishers have done their damndest (word used advisedly) to increase this echelon by publishing - well, crap basically. Hasnt worked, The ephemera - '-ooks' as a well-known ANZer called them- like celebrity bios & exposes - sell heaps, initially, and then clog the 10% bins ever after.

And *no-one* is passionate about them-

if you're the person who wrote the article?blog? that ultimately called forth Gerard's post, you deserve's Anon's scorn.