Christopher Hibbert, 84, Lively Historian, Dies
By WILLIAM GRIMES in The New York Post, January 6, 2009
Christopher Hibbert, whose stylishly written, fast-paced histories and biographies embraced subjects as varied as King George IV, the French Revolution, the emperors of China and the city of Rome, died on Dec. 21 in Henley-on-Thames, England. He was 84 and lived in Henley-on-Thames. 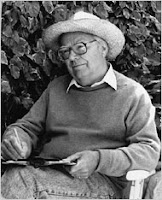 The cause was bronchial pneumonia, said his daughter Kate Hibbert.
Although sometimes regarded askance by academic historians, Mr. Hibbert won a wide readership with his popular approach to historical subjects and his gift for narrative, on display in more than 60 books. He was a painstaking researcher but incurably readable, and critics often noted that his histories of, say, the Battle of Agincourt or the European Grand Tour had all the qualities of a good novel.
Read the full piece at NYT.
Posted by Beattie's Book Blog at 7:28 am