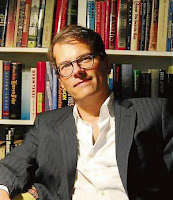 WHEN Texan-born Chip Rolley took a job with the women's magazines Ms and Sassy in New York 20 years ago he did not know how he was shaping his future.
In 1993 he moved to Australia as a freelance journalist and the partner of Anne Summers, the Australian feminist writer who had co-owned the New York magazines with Sandra Yates.
Now he has been chosen as guest artistic director of the Sydney Writers' Festival for next year by the festival board, which Yates chairs.

"It's a great opportunity," he said yesterday. "I went into the interview with a lot of innovative ideas about programming and strong views on delivering a good mix. With more than 300 writers and 400 sessions, there's an extreme amount of programming."
Rolley's one-year appointment is part of an unusual arrangement to retain the current director, Wendy Were, who will have her first baby in April, a month before this year's festival.
The full story SMH online.
Posted by Beattie's Book Blog at 12:34 pm