For 12 years, from 1992 to 2004, she co-ordinated the Writers and Readers Week of the New Zealand International Arts Festival. She edited New Zealand’s longest-running literary magazine Landfall from 1993 to 2000 and under her stewardship won the 1999 Review Pages of the Year Award.

Chris Price’s poems have been widely published in literary journals. Her first solo collection, Husk, was published by Auckland University Press in March 2002 and immediately appeared in the New Zealand Top 10 Books list, an unusual event for a collection of poems and almost unheard of for a first book. Husk won the NZSA Jessie Mackay Award for Best First Book of Poetry at the 2002 Montana New Zealand Book Awards.

In 2006 Auckland University Press published Price’s genre-busting Brief Lives, a moving, funny, bold, original dictionary of ‘real’ and fictional characters inspired by the 17th century biographical dictionary written – or at least drafted – by John Aubrey. Brief Lives, (a particular favourite with Bookman Beattie), was a finalist in the Biography Category of the 2007 Montana New Zealand Book Awards and won the award for Best Non-Illustrated Book at the 2007 Spectrum Print Design Awards. .

Last Monday evening in Auckland Price's latest poetry collection, The Blind Singer, was launched in a grand and unusual manner in the very popular book launch venue, the Gus Fisher Gallery within the University of Auckland’s Kenneth Myers Centre.

After AUP Publisher Sam Elworthy welcomed the 70 strong audience he introduced Poet Laureate Michele Leggott to launch the book. She did this by cleverly creating a poem she called 9 Things to Start With using lines from various poems in The Blind Singer. She described the new collection as a diptych, a hinge picture, a pair of wings (a book). She suggested that everywhere you will find the thing in the world, and then its reverse; the image and its mirror, yes and no, me and you THE BLIND SINGER / BLACK SUN; OWL WINDOWS / SWAN SONG.
She concluded by reading Berlin from within the collection. 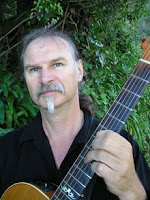 The came a remarkable and highly entertaining musical interlude starting with Robbie Duncan (pic left) who has played electric and acoustic guitar all his life, and makes his living as the proprietor of Braeburn Recording Studio in Wellington.
He and Chris occasionally perform together as Palindrome, using guitars, looping pedal, percussion and voice to create live improvisations around and rearrangements of poems. At the launch they performed 'Air on a tin whistle', a piece which was partly inspired by the life and work of Gertrude Stein, and to which they appended Stein's famous sentence 'Rose is a rose is a rose is a rose' (not quite a palindrome, but certainly a loop) in the live version. It's a poem about the ability to 'make something from nothing', or pull things out of thin air, in the manner of a magician - or a charlatan.
It seemed oddly appropriate to perform this work in the same room as an audio-visual work featuring a seal taking deep and audible draughts of air as he poked his head out of a hole in the ice. 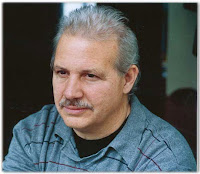 Then it was the turn of Auckland’s multi-talented muso/composer Jonathan Besser, (pic right).
Chris first worked with Jonathan Besser in 2004 when she was Writers and Readers Coordinator for the NZ International Arts Festival, and organised a number of poets to write work in response to an exhibition of ship's bells (Ringing the Watches) shown at the Festival in Wellington then later in Auckland in 2004-05, and for which Jonathan wrote a score using the voices of the bells(which were stored in a Ngauranga Gorge warehouse not far from where Chris lives). The poem she wrote about the bells, 'Stowage', appears in The Blind Singer for but at the launch Jonathan and Chris performed another poem from the book, 'Four photographs of a piano', in which each section imagines a different story with appropriate piano accompaniment: Satie's Gymnopedie, front parlour piano tunes ca. 1934, a piece in the style of Thelonious Monk, and a loosely avant-garde 'collage' to finish.
(The 'Four photographs' poem can be accessed online in Trout 14 - here's the link to the first section - http://www.trout.auckland.ac.nz/journal/14/14_33.html - you have to page forward to get to subsequent sections) .

The third poem, performed without music, was 'Dry ice', a piece triggered to a considerable extent by the work of photographer Ann Noble, some of whose Antarctic photos were - by sheer coincidence - hanging on the walls of the gallery.

It was quite an event, a book launch like no other I have attended.
Well done Chris Price, and her talented friends Michele, Robbie and Jonathan, and publisher AUP. Thanks to you all for a truly entertaining evening.
Footnote:
It would be remiss of me to not mention Bill Hammond's beautiful artwork that is so handsomely wrapped around this important new work.
And finally, I liked Price's poetic dedication - To Robbie, who hears the sound of the sound.
Posted by Beattie's Book Blog at 9:50 am