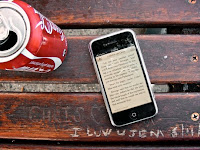 The Random House Group today announced the launch of new ebook reader applications available on the Apple App Store. The apps have been developed in partnership with Verlagsgruppe Random House in Germany and allow iPhone and iPod touch users to download digital editions of current bestselling titles.
The launch list includes: 8th Confession by James Patterson, Nothing to Lose by Lee Child and Adventures on the High Teas by Stuart Maconie. More titles from Jacqueline Wilson, Ben Elton, Alastair Campbell, Chris Ryan and Richard Branson will be released in the next few months.
"This is the first time that a major UK publisher has made mass-market books available via the Apple App Store," said Jonathan Davis, digital publisher, Random House Group Digital. "The iPhone and iPod touch are fantastic convergence devices and we're delighted customers can now enjoy digital versions of some of our bestselling books on a device which fits neatly in their pocket."
The apps give readers a natural book-like experience, allowing them to turn pages by swiping the innovative Multi-Touch user interface as well as allowing them to make notes on a page. Users can rotate the screen by simply turning the device and can change the font style, size and colour to suit their needs. Automatic bookmarking also ensures that they re-start their ebook where they last left off.
The Random House ebook apps are available from £7.49 from Apple's App Store on iPhone and iPod touch or at www.itunes.com/appstore/.
Several titles from The Random House Group's recently-launched 'Book and Beyond' enhanced ebook list - a select group of titles which carry additional rich media content - will also be available for iPhone and iPod touch users to download and play. One such title is the Lee Child thriller Nothing to Lose where readers can download and watch an exclusive animated graphic novel which shows protagonist Jack Reacher reacting to a possible suicide bomber on a subway train.
Posted by Beattie's Book Blog at 8:09 pm

Will they allow ebook competition?