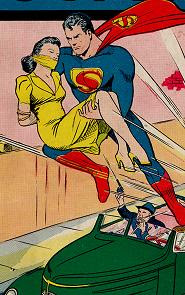 May 23, 2009
The secret life of Superman
The caped crusaders of the 1940s were as clean-cut as they come – they got the bad guys, saved the girl and never had sex. Or did they?

My childhood was dominated by comic books, specifically the American sort, peopled by crime-fighting costumed superheroes. King of these was Superman. He was virtually indestructible and devoid of human flaws. He had no jealousy, no anger, no greed, no spite, no vanity — no lust.
These qualities made him phenomenally popular, but also a little dull. He had first appeared in the late 1930s, so by the time the 1960s rolled into view even the most imaginative writer would have found it hard to keep readers interested in the exploits of this immortal do-gooder. As a result, they would occasionally serve up stories that found Superman in weird situations and with weirdly different powers.
These stories tended to fall into one of two camps. In the first, Superman was under the influence of red kryptonite, the rarer version of the boring old green stuff that sapped his powers and threatened to kill him. In the grip of red kryptonite we saw Superman grow a beard and long nails, lose his powers down one side of his body, turn into evil Superman and good Clark Kent at the same time, and so on. In the second, weary writers attempting to whip up interest in the indestructible boy scout would resort to “Imaginary Stories”.
In these flights of fancy, existing outside the “real” Superman’s universe, we could enjoy reading about what it might be like if the planet Krypton had never exploded, or if Superman finally married Lois Lane, or revealed his secret identity, or lost all his powers yet still had to fight and defeat superbeings from another galaxy.
For the full story link here to The Times online.
Secret Identity: The Fetish Art of Superman’s Co-creator Joe Shuster,
by Craig Yoe, is published by Abrams, £12.99.
Posted by Beattie's Book Blog at 6:58 am