Books of The Times
In the Wilds of Tasmania, the Impacts of Empire
'A historical novel about a young aborigine girl adopted and later abandoned by a 19th century governor of Van Diemen’s Land, now known as Tasmania.
By MICHIKO KAKUTANI writing in NYT Published: May 21, 2009
The evils of colonialism and the hubris of Enlightenment ideas were two central themes in Richard Flanagan’s dazzling, phantasmagorical 2002 masterpiece, “Gould’s Book of Fish,” and he returns to them in his new novel, “Wanting.”
Once again, he has taken a real-life figure from Tasmanian history as a starting point, and worked an elaborate improvisation on that individual’s experiences. In “Fish” that person was a 19th-century convict and forger named William Buelow Gould, who made a series of remarkable fish and bird paintings; in “Wanting” it is a young aborigine girl known as Mathinna, who was adopted and later abandoned by the governor of Van Diemen’s Land (now Tasmania), the famed polar explorer Sir John Franklin, and his wife, Lady Franklin. 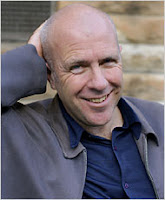 Author photo by Colin MacDougall
Richard Flanagan
WANTING
By Richard Flanagan
256 pages. Atlantic Monthly Press. $24.
Though “Wanting” is a flawed and much slighter work than “Fish” — an uneven chamber piece, compared with a glorious, full-blown symphony — it still recounts a haunting and powerful story. It is a story about an innocent caught in the gears of the British imperial machine; a story about two famous Victorian men — Sir John and Charles Dickens — and the odd connections between their lives; and a story about the costs of disowning love and maintaining a “disciplined heart.”
The English characters in “Wanting” value their sense of themselves as decent, godly Christians: exemplars of English goodness, English valor and English rectitude — “emissaries of God, science, justice.” They describe the aborigines they are fighting in Tasmania and Australia as “wild blacks” and those who collaborate with them as “tame blacks.” The more gung-ho want to exterminate the natives; the kindlier ones see them as “objects of the greatest commiseration” and aim to lift them up out of savagery and turn them into replica Englishmen.
Read the full review at NYT.
Posted by Beattie's Book Blog at 8:26 pm