GABRIEL GARCíA MÁRQUEZ A Life
By Gerald Martin Illustrated.
642 pages. Alfred A. Knopf. $37.50.
Gerald Martin’s biography of Gabriel García Márquez is the authoritative English-language study of the Colombian literary superstar, written by the ideal man for the job.return encodeURIComponent('Books of The Times');
By JANET MASLIN, Published in The New York Times: May 27, 2009 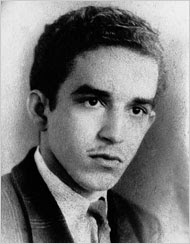 In a January 2006 interview with a Barcelona newspaper, Gabriel García Márquez, whose memory had begun to fail, deflected a question about his past. “You will have to ask my official biographer, Gerald Martin, about that sort of thing,” he said, “only I think he’s waiting for something to happen to me before he finishes.”

Gara-Archive
The author Gabriel García Márquez in the mid-1940s.
This otherwise doom-laden remark brought good news to the newly designated “official biographer.” Mr. Martin at that point had devoted 15 years of his own life to chronicling that of Mr. García Márquez, though he spent a total of only a month in that Nobel laureate’s company during his extended research. Until that point Mr. Martin had called this project only a “tolerated biography.” It has turned out to be much, much more.
This intensive, assured, penetratingly analytical book will be the authoritative English-language study of Mr. García Márquez until Mr. Martin can complete an already 2,000-page, 6,000-footnote version “in a few more years, if life is kind.”
He compressed that sprawling magnum opus into 545 pages (plus notes and index), a “brief, relatively compact narrative,” so it could be published “while the subject of this work, now a man past 80, is still alive and in a position to read it.” Both author and subject have been treated for lymphoma, Mr. Martin says.
That kind of bluntness runs throughout “Gabriel García Márquez: A Life,” and it is essential to the book’s success. The last thing this literary lion needed was a fawning, accommodating Boswell. Nor did he need a biographer eager to show off his own flair. When writing about Mr. García Márquez, king of the magical realists, Mr. Martin understands that it is best to stick to the facts and skip the fancy footwork.
Could any biographer have been better suited to this gargantuan undertaking? Absolutely not: Mr. Martin is the ideal man for the job. He has already written studies of 20th-century Latin American fiction; translated the work of another Latin American Nobel laureate, Miguel Ángel Asturias; and written about Latin American history.
These are essential prerequisites for unraveling the labyrinthine cultural and political aspects of Mr. García Márquez’s peripatetic life. So are Mr. Martin’s demonstrable patience, wide range of knowledge and keen understanding of his subject’s worldwide literary forebears, from Cervantes to Dostoyevsky to Mark Twain.
Read the rest of Maslin's full, detailed NYT review here.
And for a UK review this from The Independent.
Posted by Beattie's Book Blog at 11:18 am