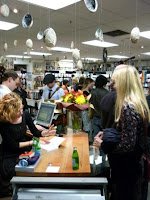 weeks ago. The other two were Eleanor Catton (Rehearsal) and Bridget van der Zijp (Misconduct).
Last night at Unity Books in Wellington, (how many book launches have they held in May?), the much-anticipated book was launched by Fergus Barrowman , publisher at Victoria University Press. The place was packed, as can be seen from pic right, with family and friends especially well repres 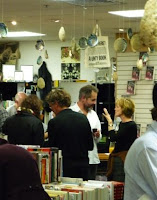 ented. The book sold very well at the launch and my spies tell me it continues to sell well today.

Bearded man in pic left is Fergus Barrowman of VUP. A reader of this page may identify the woman to whom he is listening?
Posted by Beattie's Book Blog at 1:07 pm

And that's not Fergus, it's Hagrid, who got barbered just for the launch.

Relief got a rave review on nine-to-noon recently (I heard it replayed in the wee hours of the morning of 23 June, so I don't know when the original review was broadcast, but presumably it's available on NatRad's webpage somewhere). It's on the strength of that review that I've arrived here. Ah, the Internet...
:^)

Found it. The review first aired on 15 June and can be downloaded at:
http://www.radionz.co.nz/audio/national/ntn/2009/06/15/book_review_-_relief