William Dart enjoys The Italian Girl in Algiers at the Aotea Centre
By William Dart reviweing in the New Zealand Herald ,30 May, 2009 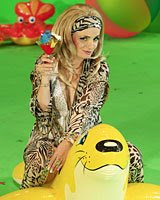 What: The Italian Girl in Algiers.Where: Aotea Centre, to June 6.

The Italian Girl in Algiers launched this year's NBR New Zealand Opera season in a riot of lime green, chintz and glamour, complete with a bevy of bodacious babes.
There were no turbaned potentates and harems on the Aotea stage but, instead, we saw the cast and crew of a Latino soap opera, as director Colin McColl presented his on-screen and behind-the-scenes take on Rossini's opera.
Set numbers were ingeniously played out against a chroma-key screen, enabling us to see the characters on screen, duetting on water-skis, quartetting on a luxury yacht or, in the case of the heroine, playing the femme fatale against a Renaissance Venus.
Backstage goings-on were dished out in the snap 'n' crackle of recitative, while scriptgirls and make-up teams hovered and fussed over the stars.
It was wonderfully wacky, even inspiring the occasional applause over the music.
Read the full William Dart review at NZH online.
Footnote:
The Bookman attended this performance also and was thrilled and entertained by it. Opera like I have never seen before. Think a funny Roger Hall play crossed with the soap opera Shortland Street and all set to Rossini's gorgeous music. Great stuff.
Posted by Beattie's Book Blog at 11:54 am