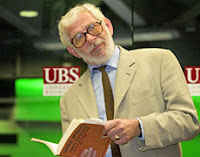 New Zealnd Herald , Wednesday May 27, 2009By Isaac Davison
Terry Sturm, who has died after a long illness, was made a CBE for his services to literature. Photo / Richard Robinson

Professor Terry Sturm, literary scholar at the University of Auckland and leading critic of Australasian literature, has died after a long illness.
For 25 years he was a member of the university's faculty of arts, where he played a leading role in placing New Zealand literature at the centre of the academic curriculum.
He had recently finished a first draft of his definitive biography of the late poet Allen Curnow, which he was determined to complete despite his ill-health.
The full story at the NZH online.
Footnote from Bookman Beattie:
The literary world is a poorer place this morning with the news of the death of Professor Terry Sturm.
RIP Terry, I am proud to have known you and to have learned from you.
Posted by Beattie's Book Blog at 8:15 am