Foxed by literary prizes? Then read on ...
Robert McCrum in The Observer, Sunday 24 May 2009 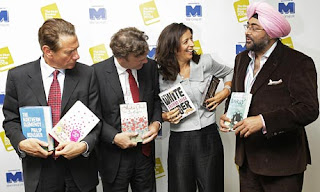 Four of the five 2008 Booker Prize judges (l-r): Michael Portillo, James Heneage, Louise Doughty and Hardeep Singh Kohli. Photograph: Shaun Curry/AFP/Getty Images
As the literary prize season gets underway with Orange, Samuel Johnson, the Jewish Quarterly's Wingate Prize and the rest, and because I had a book prize judge staying last week, I have become interested in the inevitable lit crit jargon and/or code in the discussions that surround such awards. Every book is unique, and we should not pigeonhole it, but the temptations of categorisation are hard to resist. Even the great Isaiah Berlin was not wholly immune to the lure of taxonomy.
In fiction, Berlin's famous distinction between hedgehogs and foxes, drawn from the pithy fragment attributed to the classical poet Archilochus ("The fox knows many things, but the hedgehog knows one big thing") remains influential. Hedgehogs, in Berlin's celebrated essay, see the world through the lens of one big, defining idea. They include Plato, Dante, Proust and Nietzsche. Foxes, who scour the landscape, drawing on a wide variety of experience and are indefatigably averse to a single explanatory idea, include Aristotle, Shakespeare, Goethe, James Joyce and, dare I say, Salman Rushdie.
Contrasting Tolstoy and Dostoevsky, Berlin goes on to show how fragile such simplifications can be. He notes that Tolstoy appears to defy categorisation. Tolstoy's gifts are those of a fox, but his vision and beliefs are those of a hedgehog. Berlin uses this to analyse Tolstoy's theory of history in War and Peace. But the hedgehog/fox dichotomy has become something of an academic parlour game. As a device, it is provocative, but crude. It only takes us so far.
Another, more modest, way to categorise the British novel is to see it as either a "history course novel" (a fiction by a writer who has studied history at university and who sees the drama of human affairs in the context of past and present) or an "English course novel" (a novel written by someone who read Eng lit at college).
History course novelists include Pat Barker, Ian McEwan, and AS Byatt. English course writers include Martin Amis, Colm Tóibín and Lorrie Moore.
Read the rest of McCrum's piece online.
Posted by Beattie's Book Blog at 7:03 am