Oh, boy, ‘The Slap’.
Immediately, the title galvanized me. For two reasons. Many years ago, I recall a friendly neighbourhood barbecue with close friends, when a father coldly, furiously, slapped his own lovely son, and the moment and his wife’s reaction is forever seared in my memory. They were excellent parents and although she was obviously unhappy with her husband’s action (that much we all felt, as you do, when the air is electric) she didn’t undermine him. But we all felt her cold fury too.
I recall discussing with my husband after the event, that had he done the same thing, we would most likely have had a full-on public barney. So, who was right? And this is where it becomes tricky because lets face it, arguing with the spouse in front of the slapped child is pretty harmful too. Parenting is perhaps one of the most difficult, political, and challenging roles that you ever get to negotiate with someone else.
And then, worse, my own son was slapped in a playground by an off-duty policeman – something to do with a squabble on the slide – I was inside watching my other son at swimming lessons – but I do recall the slap left a hand imprint that was still visible that night when I bathed my son. Two points here… should my pre-school son have been left by me, unsupervised in the playground allowing him to be slapped by an off-duty policeman… and the other point is blatantly obvious that the off-duty policeman should never have raised his hand to my child. But, I didn’t press charges…
Unlike Rosie and Gary in Mr Tsiolkas’s novel, ‘The Slap’.

As a writer, I have to say, immediately a huge envious wow. What a terrific premise for a novel. What an outstanding way to inhabit a whole range of different people; race, ethnicity, class; the impact on each person present at this fictional barbecue when someone (Harry), other than the parent, slaps a child (Hugo) and the parents of that child (Rosie and Gary) decide to press charges. 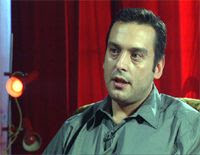 As a geologist may slice through a piece of rock, so Christos Tsiolkas (pic right) has made a painful incision into the contemporary Australian family, in all its guises and in particular the phenomenon of the emerging and expanding middles classes - kids from the back blocks who have done good.

For those of you who are squeamish about rude words, crude men, explicit sex (from both male and female perspectives) and lots of politically incorrect perspectives from flawed but authentic, pulsing-with-life-like characters, then this novel is not for you.

An example is when Bilal (who used to be Terry, but has now found Islam) refuses a beer at the barbecue offered to him. Manolis (the old Greek Patriarch) says “You must be the only Aboriginal in Australia who not want drink”. Bilal is friends with Manolis’s son Hector who is hosting the barbeque. When they were teenagers, Hector and Terry went clubbing, took drugs etc, and Hector’s mother Koula, blamed it all on “that mavraki, that blackie, all he knows to do is drink.’ But now Bilal does not drink and Hector wants to split his mate into two “mostly he wanted him to be Bilal, but sometimes he wanted a night with Terry.”

There is nothing self-conscious, or posturing about the writing, no time for the perfect mesmerising metaphor. This is story-telling at its finest, page turning (they turn themselves), insightful, raw, best. You find yourself taking sides, and outraged (well, I was) by Rosie who is breast-feeding the four year old Hugo (no, not because of that), but her passive aggression and her inability or unwillingness to provide any reasonable parameters for her child. And then, you enter Rosie’s head and life, and see that she had planned the perfect home-birth and when it went wrong, for the first six months she was convinced she would kill her child. So, she makes a decision in order to survive motherhood… “He was the focus, he was the centre, he possessed her body, she lost herself in him. This was how she had set herself free.”

I was most particularly moved by the story of Manolis, a Greek immigrant who has never returned home to Greece and is now looking back on his life in Australia trying to comprehend the meaning of it all (yes, the big question life). His daughter-in-law Aisha is Indian, and his Greek wife Koula, disapproves, wishes her son had married a Greek girl. Manolis has a deep affection for his daughter-in-law and she is best friends with Rosie who is pressing charges against Manolis’s nephew Harry. He is confused by Aisha’s inability to understand her duty to family. Manolis approaches Aisha to request that she attend an important family get together, but she is refusing out of loyalty to her friend Rosie.
“This took him by surprise. Of course he’d gone with Harry to the court. What did these crazy Australian women expect? .The boy’s parents were dead, he was obliged to be there supporting his wife’s nephew… (And a bit further on). Surely Aisha understood that. She wasn’t a bloody barbarian. Did he have to remind her of loyalty and honour?”
“Manolis, I am sorry.”
The words dropped easily from her lips but they meant nothing. Australians used the words like a chant. Sorry sorry sorry – she was not sorry.”

There is so much more… Richie, the adolescent homosexual and his best friend Connie who is having an affair with Hector (Aisha’s husband)…oh, there is so much going on, and Richie becomes the adored baby-sitter for the hard to love, but easy to feel sorry for, four year-old Hugo. I almost expected this aspect of the story to develop its own sub-plot, but thankfully we were spared. I also really enjoyed the splendidly rendered friendships between Aisha, Anouk, and Rosie, providing another dimension for these women. How does Mr Tsiolkas do it? And too, Hector and Aisha’s marriage, their inside story, the compromises that any long term relationship has to negotiate, contrasted with his cousin Harry and wife Sandi, the suppressed violence, the silence of their friends, who know that Harry who slapped Hugo, has also hit his wife. Nothing is black and white, everything is shades of something; morality is up for discussion.
Each family present at the barbecue is given a back-story that is absorbing and revelatory and does not necessarily mitigate their behaviour, but throughout, the novel explores ideas of friendship, family, loyalties, affluence, and our expectations, the compromises, the reality versus the ideal.
The only small quibble that I have is perhaps the amount of cussing (even Koula, Manolis's old Greek wife, calls her daughter-in-law a “bitch”…ouch)…. And Rosie, Anouk, and Aisha utter their own fair share of expletives. As for the men, well, as I say, this book is not for the faint-hearted, or the prudish.
I loved it.

What an energetic fabulous review Maggie. Thank you.