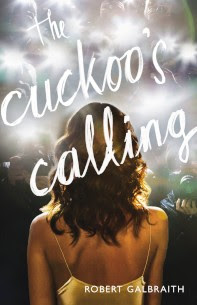 The Cuckoo's Calling, the book that has taken the media and publishing world by storm, sold 3,630 copies nationwide for the week ending July 21, according to Nielsen BookScan. The number reflects only those copies sold through retail and club outlets, which includes Barnes & Noble, Amazon, and independent booksellers. BookScan is also reporting that mass merchandise retailers, such as Wal-Mart, sold no copies in the same week.
The novel, which was revealed to have been written by J.K. Rowling under the pseudonym Robert Galbraith, edges onto BookScan's top 100 bestselling print books, coming in at #95. In contrast, the book's dominating presence on digital lists calls attention to the publisher's surprise at the sudden demand, and the lack of stock on hand. Cuckoo's Calling is #1 on Amazon's Kindle e-book list and Apple's iBooks list, as well as USA Today's bestseller list, which counts both print and digital formats.

After the news broke, there was a mad scramble from both booksellers and Rowling's fans to secure print copies. Rowling's U.S. publisher, Hachette's Mulholland Books, announced on July 16that they would be returning to press for 300,000 copies, which would begin shipment on July 19, and reported another 80,000 print run on July 23. As of July 24, all initial orders were shipped, according to the publisher, and most have been received or soon will be.
Posted by Beattie's Book Blog at 6:36 am