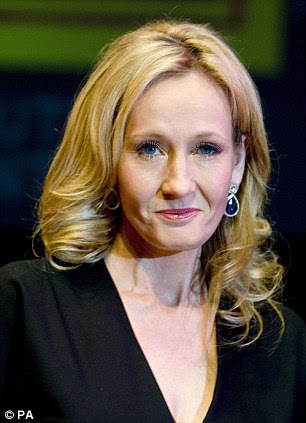 'Robert Galbraith': Author JK Rowling has spoken about the events surrounding the identity of the real author of crime novel The Cuckoo's Calling -

Author JK Rowling has revealed she spent a week practicing the fake signature of her pseudonym, Robert Galbraith - the name she used for her new detective novel.
The Harry Potter creator signed a few copies of the book under her pen name, after working on the fake autograph.
'While we can't verify whether any particular book currently on eBay etc is genuine, any future books I sign in this way will be authenticated,' she admitted.
'My Robert Galbraith signature is distinctive and consistent; I spent a whole weekend practicing it to make sure,' she said.
Miss Rowling also revealed had offers from two TV firms to bring the crime novel to the screen even before she was 'outed'.
She was exposed last week after publishing a detective tale, The Cuckoo's Calling, under the name of Robert Galbraith earlier this year.
She has denied claims it was a publicity stunt and said her unmasking left her angered, particularly when it emerged that her cover was blown by a senior figure at a legal firm which has represented her in the past.
Rowling has now pointed out the book was already gathering interest for adaptations and had sold a respectable number of copies. But she said it was becoming 'increasingly complicated' to keep the charade going.
She said: 'At the point I was 'outed', Robert had sold 8,500 English language copies across all formats (hardback, eBook, library and audiobook) and received two offers from television production companies.

Read more: http://www.dailymail.co.uk/news/article-2377451/Harry-Potter-author-JK-Rowling-speaks-secret-book-wrote-false-name.html#ixzz2a5NluPMF
Posted by Beattie's Book Blog at 7:09 am