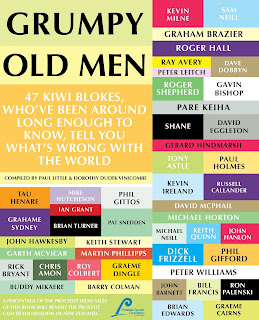 
They’re all irate about something, sounding off in Grumpy Old Men on alcohol, speed limits, education, jet-skis, nutritionists, pinot noir,small change, tee shirt labels and a whole lot of other things they’d like to shake a stick at. John Hawkesby has found eleven things that irk him, wile Kevin Ireland seems pretty happy as he only needed half a page to state his view.


Some contributions are serious and some light-hearted, some are trivial and some profound, but all are entertaining and most are thought-provoking. All round a damned good read, the perfect Father’s Day gift for grumpy old men or grumpy old men in training.