In the Beginning Was the Word; Now the Word Is on an App 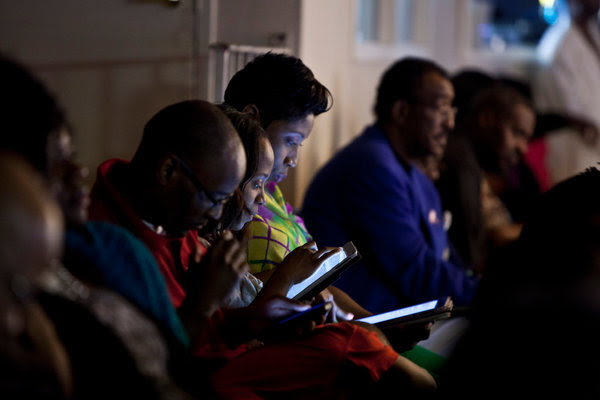 
For millions of readers around the world, a wildly successful free Bible app, YouVersion, is changing how, where and when they read the Bible.
Built by LifeChurch.tv, one of the nation’s largest and most technologically advanced evangelical churches, YouVersion is part of what the church calls its “digital missions.” They include a platform for online church services and prepackaged worship videos that the church distributes free. A digital tithing system and an interactive children’s Bible are in the works.
It’s all part of the church’s aspiration to be a kind of I.T. department for churches everywhere. YouVersion, with over 600 Bible translations in more than 400 languages, is by far the church’s biggest success. The app is nondenominational, including versions embraced by Catholics, Russian Orthodox and Messianic Jews. This month, the app reached 100 million downloads, placing it in the company of technology start-ups like Instagram and Dropbox.
“They have defined what it means to access God’s word on a mobile device,” said Geoff Dennis, an executive vice president of Crossway, one of many Bible publishers — from small presses to global Bible societies to News Corporation’s Thomas Nelson imprint — that have licensed their translations, free, to the church.
When Jen Sears, 37, a human resources manager in Oklahoma City, wants to pray these days, she leaves her Bible behind and grabs her phone instead.
“I have my print Bible sitting on my dresser at home, but it hasn’t moved” in the four years since she downloaded YouVersion, Mrs. Sears said.
The app, marketed simply as “The Bible,” has brought new donors to LifeChurch.tv. About $3 million was given by a handful of large donors to support development of the app last year; the church raised nearly $60 million over all, according to its financial statements. The church says it will have spent almost $20 million over all on YouVersion by the end of this year.
More
Posted by Beattie's Book Blog at 8:07 pm