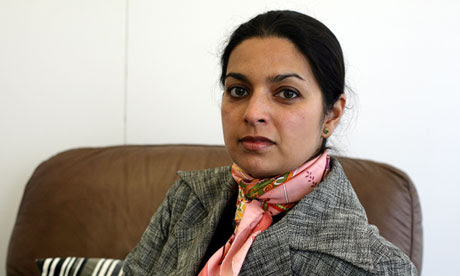 Jhumpa Lahiri, one of the authors longlisted for this year's Man Booker prize. Photograph: Martin Godwin
"There was no policy of giant killing or sacred cow slaughter," promised the chair of judges, Robert Macfarlane. As he pointed out, it's a year in which "unusually few" of the big names – previous Booker winners and shortlistees – have new books out. Their loss has been our gain as the longlist casts a wide net in terms of both geography and tone, ranging from the slimmest of novels – Colm Tóibín's stark, surprising The Testament of Mary conjures the gospel according to Jesus's mother in a mere 100-odd pages – to vast doorstops, playful with genre and form. Though only three of the books are debuts, few come from familiar names, and several are not yet in bookshops.

Of the books still to be published, Jhumpa Lahiri's The Lowland, set in India and America and out in September, must be a frontrunner. She's an exquisite writer on family and belonging, whose dual nationality has the happy result of making her eligible for prizes on both sides of the Atlantic (she took a Pulitzer prize for her debut short story collection, Interpreter of Maladies). Also not out until September is Eleanor Catton's highly wrought astrological extravaganza about a woman on trial for murder during the 19th-century New Zealand goldrush, eagerly awaited by fans of her equally dazzling debut The Rehearsal. This is a jury not afraid to be experimental.

In that vein, perhaps the most notable book on the list is film-maker Richard House's The Kills.
Authors have been trying for years through ebooks and apps to liberate novels from linear narrative. House's "digital-first" crime thriller is studded with audio and video riffing off the main story and developing the characters (though it's also published as a hefty hardback). Booker nomination will boost the profile of this project and ebook innovation more generally.

Surprises were nevertheless something we expected to see this year. Though I mourn the omission of personal favourites such as Kate Atkinson and Mohsin Hamid, and had thought, with the jury's taste for experiment and science fiction, that David Peace and Margaret Atwood might be on the list, I am intrigued by the unexpected.

There was only one book I felt sure would be there, and not just because of the chair of judges' own speciality of nature writing: Jim Crace's profound vision of the enclosure of England's fields, Harvest. It would make a worthy winner, but I'm sure there are more surprises to come.
Posted by Beattie's Book Blog at 8:48 pm