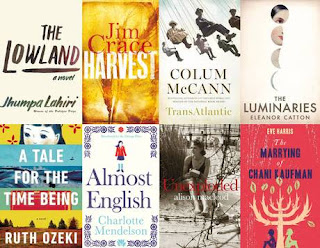 24.07.13 | Joshua Farrington - The Bookseller
The newly released Man Booker Prize longlist has been praised by the media for its diversity, but criticised for missing several big names and including multiple titles that have yet to be published.
The Guardian praised the judges, and said: "This is a jury not afraid to be experimental."

It commended the scope of the longlist and said: "The longlist casts a wide net in terms of both geography and time, ranging from the slimmest of novels—Colm Tóibín's stark, surprising The Testament of Mary conjures the gospel according to Jesus's mother in a mere 100-odd pages—to vast doorstops, playful with genre and form."

The Daily Mail focused on authors it saw as being "snubbed" from the Booker list, describing the nominated authors as "obscure . . . mostly unknown". It said: "This year's longlist is notable for the number of big-name authors who have been overlooked, including J M Coetzee, Roddy Doyle and Margaret Atwood. Five of the books have yet to be published."

The Daily Mail also quoted Alex Donohue of bookmaker Ladbrokes, which has appointed Jim Crace as the current favourite at 9/2. He said: "The longlist this year was one of the hardest of all time to create odds for. At this stage we're just favouring Crace but we don't want to write off any contender too hastily."

The Telegraph also mentioned authors that hadn't made the cut, including Atwood and Coetzee, as well as Chimamanda Ngozi Adichie and David Peace. It also said the fact that five of the books had yet to be published was "a fly in the ointment". It said: "Five of these books haven’t yet been published and so readers wanting to sample them will have to wait. Publishers have their schedules but it doesn’t seem terribly joined-up, especially for beleaguered booksellers."

The London Evening Standard described it as "a remarkably young list", and one which focused on authors based in the US: "It's not at all a British-biased choice." The newspaper added: "If this longlist may not immediately delight the booksellers, who would doubtless have liked to see a few more established names represented — Kate Atkinson, perhaps, or Jonathan Coe — it recommends a lot of intriguing new writers to discover."

Nearly all of the media responses mentioned Richard House's The Kills (Picador), and the fact is was first published digitally and has extra material beyond the text. The Guardian called it "the most notable book on the list", and said: "[The] Booker nomination will boost the profile of this project and e-book innovation more generally."

Meanwhile Jo Rutherford, fiction buyer at Toppings & Company in Ely, said she was surprised not to see Kate Atkinson on the list. She said: "We have sold lots of copies of Atkinson and have been really behind it – we love it and our readers love it, so it was a surprise not to see it on there.
The same could be said for Evie Wyld and some others. It's also a shame that five of the books aren't yet available, as we miss this chance to push them. On the plus side, it means we can now get in first editions and try and organise author events for when they do come out, and push them like that."
Posted by Beattie's Book Blog at 7:53 am