The first-time novelist asks why the media are so interested in herself, not her book, and why can't she be paid? 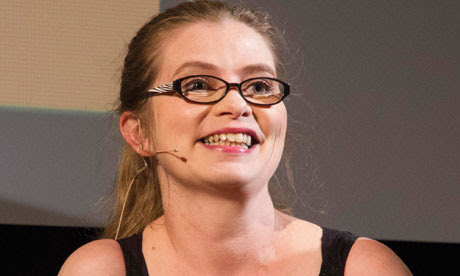 Tricky questions ... Anakana Schofield. Photograph: Tom Delamere
Last year my first novel Malarky was published in Canada; it is about to come out in Britain. I received a $1,000 advance from my Canadian publisher and a megawatty – by my impoverished standards – £6,500 advance from OneWorld in the UK. That might sound a lot, but Malarky took me a dozen years to write. Those were a dozen years of dire poverty. "You're lucky to be published at all" is the default response – and they're right, I am. (I am lucky that independent publishers took a bet on me.) I realise readers of this article will think I'm wrong to complain about my lot, but it's not really my lot that I'm concerned with here: it's the business of publicising a novel, and of what it is to be a writer these days. I might be considered lucky (though I've worked for it), but we don't tell train drivers that they're lucky there are trains. Nor do we ask train drivers to drive trains up and down to Scotland unpaid, for the glory of saying to the public: look, here is a train, consider getting on it someday! So I have three grumbles, or rather I want to raise three tricky questions.

First: why do the media care so much about the novelist – what pen she uses, what time she gets up in the morning – when they should be concentrating on the novel?
A debut author's publicist tells her, as every honest publicist should, the bald truth: that newspapers like personal stories. Ideally, confessional stories. Best of all: confessional stories that relate to the fiction she spent years making up. So she spends years using her imagination only to discover that she must dig about in her psychoanalytic compost heap, and retrieve something that reveals that, in fact, she has not made it up at all.

As Malarky is an exploration of grief and sexuality, such a confessional would require, say, the insertion of an anecdote about how I liked to spy on men having sex in bathhouses. This would tidily explain how (or why) I created a novel in which, among a myriad other things, an Irish mother re-enacts her gay son's love acts.

The truth is otherwise: sadly, no splashy bathhouse peeping. Instead, I sat in a library surrounded by medical students and made it up. If you want the specifics: it was a banal cubicle at the back of the third floor of Vancouver general hospital Diamond building. I did, however, read an excellent book on Syrian underwear and ogled Comin' at Ya!: The homoerotic 3D photos of Denny Denfield.
More
Posted by Beattie's Book Blog at 4:59 pm