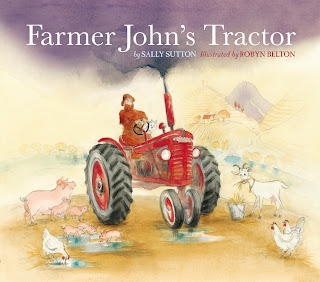 Farmer John’s rusty old tractor lies locked in the shed. Rusty yet trusty and orangey-red. When the rain comes and the river rises, will Farmer John’s tractor be able to save the day?

Sally Sutton is an playwright and children’s writer. Her first picture book, Crazy Kiwi Tops and Tails, was published by Penguin in 2006. Sally has an M.A. (Hons) in German and lives in with her husband and daughter. Roadworks, her third picture book, won the Picture Book category at the New Zealand Post Children’s Book Awards in 2009.
What a talent she is proving to be.

Robyn Belton is one of ’s best known and most celebrated children’s book illustrators. Her first book with Joy Cowley, Greedy Cat (1983), established her in and the and their second collaboration, The Duck in the Gun (1985), won her the Russell Clark Award in 1985. Robyn’s 1997 book with Jennifer Beck, The Bantam and the Soldier, won both the Picture Book Category of the New Zealand Post Children’s Book Awards, and the Book of the Year.
Robyn was the 2006 winner of the prestigious award for children's literature, the Margaret Mahy Medal. Farm,er John's Tractor is Robyn at her very best. Stunning.

Zara is broken. She’s in a coma, trapped in the world of her subconscious. A world of painful memories, distant voices and dark secrets. Secrets she has to unlock. Her life depends on it.

Elizabeth Pulford was born in , , but was brought up in from the age of two. She began writing in her early 40s. Since then her publications have included articles, poetry, short stories in newspapers, magazines and on the radio. Many of her adult short stories have won national competitions. Her children’s books range from early readers through to YA novels - two of which have been finalists for the New Zealand Post Book Awards for Children & Young Adults. has always loved books. In fact some of her best friends are books and she couldn’t imagine life without them. Her previous titles with Walker Books are Castlecliff & the Fossil Princess, Blackthorn, Blackthorn’s Betrayal and Tussock, which was a finalist in the New Zealand Post Children’s Book Awards, Junior Fiction category, 2011.

Angus Gomes is a freelance illustrator based in . He was born in , , and lived there until he was 10, before moving to . He studied a Bachelor of Design for 4 years, majoring in Visual Communication, and immediately started work as a graphic designer after graduating. He has an interest in fashion illustration, people and animals. Broken is his first title with Walker Books.