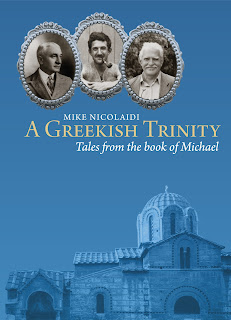 In 1990 Aunt Tessa travelled with me by train from London to Tunbridge Wells to show me the graves of my grandparents. En route, she seemed to confirm my grandfather’s opium trading background in India and Turkey and a possible Irish connection on my grandmother’s side. On that cool spring afternoon, below an abnormally Mediterranean-blue English sky, I paid my respects and at last felt able to connect myself to those old portraits on the wall of the home I was brought up in on the other side of the world.


At the time of my father’s death I was spurred to examine the enigma of Nicolaidi, the strange surname I had carried from birth, and to grapple with the slippery concept of personal identity.
I took many journeys — some purely of the mind, and some external and more physically demanding for the hard research. Destinations included the UK, where my father was born, and Turkey and Greece on the cusp of the Oriental and European worlds. It was from the Eastern Mediterranean region that my Nicolaidi grandfather, who I never knew, most probably sprang.
All three of us were Michael.


This book is not a memoir, although events from my past and present life are contained within it. Rather I see it as a Greekish trinity, a ‘devotion’ or bonded love story, melding fact and fiction, reason and emotion in overlapping worlds of so-called reality and the imagination.

About the author:
Michael Nicolaidi has spent much of his working life as a journalist, both in New Zealand and overseas. He was the founding president of Playmarket, has been a board member of the New Zealand Film Commission, and has written and directed several short films.  Mike lives near Feilding.

Posted by Beattie's Book Blog at 6:06 am