Fifty Shades of Grey thrusts erotica into the mainstream 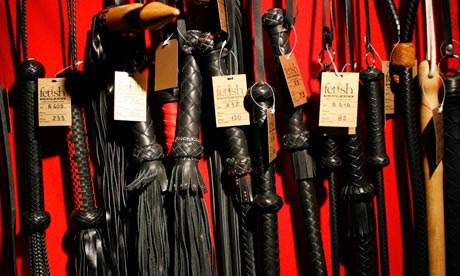 Hit … Fifty Shades of Grey, a tale of bondage and domination, has been lapped up by the public. Photograph: David Levene for the Guardian

An erotic novel that started life as fan-fiction has become the fastest-selling book of the year, beating Suzanne Collins, James Patterson and John Grisham to the top of the charts this week and prompting a rush among publishers to land a slice of the saucy action.
EL James's tale of bondage and domination, Fifty Shades of Grey, sold more than 100,000 copies in its first week, its publisher said on Tuesday. Telling of the increasingly dark relationship between a college student and a billionaire, the novel was bought by Arrow for a six-figure sum in March. Turned around in under a month to meet public appetite, it will be followed tomorrow with the second and third books in the trilogy – which are already topping Amazon's bestseller.
James's success marks a change in the way erotica is viewed – and bought – by the public, say publishers, a shift in gear even following the success of noughties titles including the Belle de Jour books, and Girl with a One Track Mind. And they want a part of it.
"What is changing now is the audience, and I think that Fifty Shades of Grey, and the firestorm around it, has done that … Now it is OK to read erotica – in fact, it is cool," said author KD Grace, whose book Surrogates has just been launched by HarperCollins's new ebook erotica line Mischief Books. "Women almost had to be given permission to be open about it, to say, 'I read erotica and so what?', rather than reading in the closet."
With Ebury also piling into erotica with the relaunch of classic imprint Black Lace this September, adding to its new Rouge line of spicy romantic stories, Grace said it was "very exciting to see the big publishers getting involved … Definitely when my first novel was published you wouldn't have seen this – it was 'those' people publish erotica; we don't. But, let's face it, money speaks and that's never going to change. When they see how well Fifty Shades has done, how could they ignore it?"
Adam Nevill, who runs Mischief at HarperCollins, said the attitude to erotica across the board had "incrementally" changed. "It's not forbidden or taboo any more," he said. "It's just something most people are more accustomed to."
Mischief is publishing 60 new erotica titles a year – "a huge editorial undertaking", said Nevill, but "HarperCollins has really got behind it and backed it". He previously edited the Black Lace erotica line, which stopped commissioning new titles in 2009. "For publishers, as the range of books reduced in bricks and mortar stores, the availability of erotica in print started to reduce," he said. "But the internet offers infinite possibilities."
At Ebury, Gillian Green heads the Rouge list – which is releasing two titles a month – as well as relaunching Black Lace and tapping into the appetite for James's work with the re-release of "classic" erotica title The Ninety Days of Genevieve, echoing the plain cover of Fifty Shades.
"What EL James has done is clearly taken erotic fiction to the mainstream. It's not that women weren't reading it, it's just that it wasn't available in Tesco and Sainsbury's. So more power to her," said Green. "It's like we've got permission to enjoy it – she's the acceptable face of saucy fiction."
James's publisher Selina Walker at Arrow attributed the book's groundbreaking sales to two things: first, the much-cited rise of ebooks, and the ability they give to read erotica in private – Fifty Shades of Grey is the fastest selling ebook in the history of the Random House Group in the UK.
"But that doesn't explain the success of the physical books," said Walker. "This is about more than just the Kindle. I think Fifty Shades is fantasy, with its yachts and locations and gorgeous men, making it acceptable for women. Men had sexual fantasies but women didn't, and if they did they kept it quiet. Suddenly, it is perfectly acceptable to be seen reading a romance like this, and to talk about it.
Full story at The Guardian.
Posted by Beattie's Book Blog at 6:13 am