Books that changed me: Oliver Jeffers


The Bad Tempered Ladybird - Eric Carle
When I was very small, I was fascinated by the last scene where the ladybird picks a fight with a whale. I couldn't wrap my mind around why the whale looked so big when the book was the same size as my other books. Later I realised it was because I could see the ladybird beside the whale making it look enormous. I felt like I'd been let in on a magician's secret.

The BFG - Roald Dahl
I wasn't a big reader when I was growing up, preferring to look at pictures in books and play football on the street. Then someone gave me this book. I was hooked. Dahl has such a dark and vivid imagination and such an incredible way of painting stories with words that is impossible to resist. It's a good thing he had written plenty of other books, so I learnt my enjoyment of one book wasn't a freak occurrence.

The Giving Tree - Shel Silverstein
I was given a copy of this book while I was still in art college. It was right at a time when my illustration and fine-art practiscs were showing all signs of combining and transforming into picture books. This book was the official trigger. It was the best picture book I had read in a long time. It was inspirational in the emotion it generated with so few words and such sparse drawings. 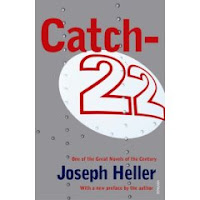 Catch-22 - Joseph Heller
It's not only children's books that have had a profound effect on me. Much of my fine-art practice has centred on the gaps between logical and emotional understanding, and this book tackles that area with a kick in the stomach. I liken the structure of it to a piece of music that begins in a cacophony of discordant sounds, which serves only to make the crescendo all the more beautiful when it arrives

Read more: http://www.smh.com.au/entertainment/books/books-that-changed-me-oliver-jeffers-20120428-1xr2y.html#ixzz1tMyXaFej
Posted by Beattie's Book Blog at 8:41 am