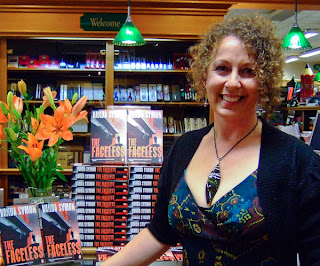 Author Vanda Symon reports of the launch of her latest book:


The Faceless was sent off into the world in fine fashion at The University Book Shop on Friday night. A very jovial crowd of friends, family and colleagues enjoyed lots of chat, good wine and nibbles in the wonderful atmosphere there.
We were welcomed by Bronwyn Wylie-Gibb of the University Book Shop, and The Faceless was launched by Penguin Fiction Commissioning Editor Katie Haworth before I got to be centre stage. It was a fabulous, warm and jovial evening, and a great way to celebrate foisting The Faceless onto an unsuspecting public (-:


The Bookman is reviewing The Faceless on Radio New Zealand 14 May so will write about the book on the blog after that.


Meantime here is the publishers blurb:

Bradley is a middle-aged man trapped in middle-class New Zealand. He is in a job that he hates, working day after day to support his wife and two children. One day when it all gets too much, Bradley picks up a teenage hooker in downtown Auckland. Unfortunately he can't keep it up and then she laughs at him. That was a mistake. He beats her, ties her up and takes her to an abandoned warehouse that he owns. But then he doesn't know what to do.
Max is homeless. He eats from rubbish bins, bums cigarettes from anyone and anywhere, including the footpath, and he doesn't smell that fresh. But Max has one friend and she has gone missing. If he is to find her he is going to have to call on some people from his past life and re-open old wounds that have remained unhealed for a long time.

I take it this is a stand alone book, not one of Vanda's detective series?

Yes, The Faceless is a stand alone novel, set in Auckland.

I like the cover art - congrats to the artist.