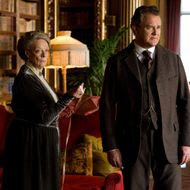 By Margaret Lyons
Forbes' annual "Fictional 15" rattles off the year's richest fictional characters, and this year's notables control a combined wealth of $209.5 billion. Topping this year's list is the familiar wealth-hoarder Smaug, the dragon from The Hobbit, who moved up thanks to Forbes' more accurate analysis of his size; since he sleeps on a mound of treasure, this meant that the fictional mound is also larger, which puts his net worth at $62 billion. Twilight's Carlisle Cullen ranked third, with $36.3 billion (wise investments), and Tony Stark and Bruce Wayne, with $9.3 billion and $6.9 billion respectively, are nothing to sneeze at.
From Vulture.
Posted by Beattie's Book Blog at 2:07 pm