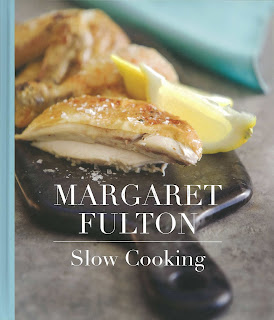 Margaret Fulton is of course one of ’s leading and best-loved cookery experts.
The matriarch of Australian cooking, she brings over 40 years of experience  to show you how to create succulent and delicious dishes with the versatile slow cooker.   First published in 1976 as The Margaret Fulton Crock-Pot Cookbook, this has been fully reworked for use with current day appliances and methods, with the assistance of Margaret’s daughter Suzanne Gibbs (a leading food writer in her own right), and accompanied by brand new full-colour photography throughout.
Just set and forget your slow cooker for classic hearty soups, tender meat, pot roasted chickens and good old fashioned puddings, cooked to perfection and ready when you need it.
Slow Cooking is likely to become an essential aid for all busy cooks today and provides recipes  for a wide range of dishes including soups, meats, roasts, fish, vegetables,  lentil meals, bread and cakes, desserts, bottled fruit and breakfasts.
The publishers have kindly agreed to let me share two of the main course meat recipes with you, one I have made and one I plan for next weekend, and these appear below.

About the author:
Margaret Fulton OAM, matriarch of Australian cooking, 'guru', writer, journalist, author, and commentator, was the first of this genre of writers in .  Her original The Margaret Fulton Cookbook, first published in 1968 (with a revised edition released in April 2010), sold over 1.5 million copies and taught generations of families how to cook and entertain. Margaret has been nominated by the National Trust as an Australian Living National Treasure and in 2009 she was named by a Sydney Morning Herald panel as one of the 25 Australians who has most changed the nation.

Other canned legumes such as red kidney or cannellini beans may be used instead of chick peas.

Trim meat and cut into large cubes. In large frying pan brown meat, onions and garlic in oil; drain. Place in slow cooker. Add eggplant.
Combine stock, flour, cinnamon, bay leaf, salt and pepper and pour into slow cooker; stir well. Cover and cook on Low setting for 8 to 10 hours, or High for 4 to 5 hours.
Half an hour before serving turn to High, stir in chick peas and tomatoes and cook until heated through and flavours blended.
Meanwhile, place couscous in a heatproof bowl and pour over 11⁄4 cups boiling water. Cover and stand for 5 minutes. Fluff with fork. Season to taste.
Serve beef with a topping of chopped fresh herbs and couscous.


Serves: 8
Cooking time: 7–10 hours on Low; 3–4 hours on High
Delicious roast pork loin or neck, fragrant with cumin and garlic. Cut a lovely fresh pineapple into spears to accompany the pork, or add to the sauce before serving to heat through
2kg (4lb) pork loin, neck or rolled, boned shoulder
2 teaspoons ground cumin
6 cloves garlic, crushed with a little salt
plenty of freshly ground pepper
1 pineapple
1⁄3 cup soy sauce
1⁄4 cup white vinegar
1⁄3 cup brown sugar
1⁄2 cup chopped fresh coriander (cilantro)
Remove the rind from the pork. It can be baked separately in a hot oven if you want crackling. Combine the cumin, garlic and pepper and rub well into meat. Cut the skin from the pineapple and use some of it to cover the piece of pork. Place the pork in a slow cooker and cook for 6 to 7 hours on Low; 3 to 4 hours on High, until almost tender. Discard the pineapple skin then baste the meat with a mixture of the soy sauce, vinegar and sugar. Return to the cooker for a further 2 to 3 hours, basting frequently. Remove pork to a platter, skim fat from sauce in slow cooker and serve as gravy with the meat. Meanwhile, cut the skinned pineapple into spears or rings and leave fresh, or saute in butter and use to garnish the pork along with the sprigs of coriander. Serve the pork carved into slices with steamed rice.