The Confidant by Helene Gremillon - reviewed by Nicky Pellegrino 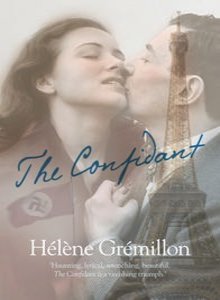 The French get away with a lot when it comes to their literature and cinema. We indulge their tendency to be hyper-romantic, wildly improbable and artily offbeat, expect it even. The Confidant by Helene Gremillon (Text, $37) is very French. It’s a wartime romance brimming with grand passions, great betrayals and deep secrets, a hit in Gremillon’s home country and now being published around the world. I found it lightly reminiscent of that other French bestseller, The Elegance Of The Hedgehog but won’t say exactly why as that would spoil the ending.
The story, set in two time frames, opens in Paris in the mid-seventies. Camille is busy reading her way through the notes of condolence that have arrived following the death of her mother. Amongst the usual platitudes, she finds one that is different. Handwritten and several pages long, the letter tells of a young village boy’s love for a girl called Annie just before the outbreak of the Second World War and is signed with the name Louis. Since she doesn’t know either of these people, Camille assumes it has been sent to her by mistake. But every Tuesday another note arrives from Louis, each continuing the story, full of confessions and secrets.
Intrigued, Camille begins looking forward to the mysterious letters as a distraction from the problems of her own life. Since she works in publishing, she suspects Louis might be an author trying to win her attention by sending his manuscript in episodes. Then the letters take a dramatic and unexpected turn with one that tells of Annie’s decision to have a surrogate baby for an older friend known as Madame M. The more of these letters Camille reads, the more she finds unexpected links to her own life. Swinging from fascinated to fearful, she begins to wonder if she is the intended recipient after all.
Mostly set between 1939 and 1943, this is a debut novel for Gremillon, a Parisian former newspaper journalist. It isn’t perfect by any means. In fact, taken as a whole, I found it pretty far-fetched. The plot strains at times and the Russian doll-effect of stories within stories can get a little confusing. But, since it’s French, it seemed easy enough to shrug my shoulders and allow myself to be seduced by its charms – and it has plenty of them.
Wartime romances are common enough but The Confidant is no formulaic boy-meets-girl, boy-loses-girl affair. In fact, Louis is only ever a cipher, this is above all a story about women – strong, tenacious women driven by desire.
Sensitively written, it is a suspenseful, absorbing tale about the power of history (both of world events and small lives) and how it plays on the present. A stylish novel with vivid characters and a quirky denouement. Very, very French.
Footnote:

Nicky Pellegrino,(right), a successful Auckland-based author of popular fiction is also the Books Editor of the Herald on Sunday where the above piece was first published on 29 April, 2012.
Nicky is chairing Tastings & Tiaras with Kathy Lette at the Auckland Writers & Readers Festival on Saturday May 12. Tickets still available. Use link.