Commonwealth Writers has announced shortlists for the 2012 Commonwealth Book Prize and Commonwealth Short Story Prize. Writers from around the world have been shortlisted for each prize in anticipation of becoming a regional winner on 22 May and ultimately competing for overall winner which will be announced at Hay Festival on 8 June.
Commonwealth Writers is a new cultural programme within the Commonwealth Foundation which develops, connects and inspires writers. By awarding prizes and running on-the-ground activities, it works in partnership with international literary organisations, the wider cultural industries and civil society to help writers develop their craft in the fifty four countries of the Commonwealth. www.commonwealthwriters.org is a forum where members from anywhere in the world can exchange ideas and contribute to debates.
A regional winner for each prize will be awarded in five regions: Africa, Asia, Canada and Europe, Caribbean, and the Pacific.
Commenting on the shortlisted entries, chair of the Commonwealth Book Prize, Margaret Busby said, “Being a prize for first novels, the judges were looking for potential and promise from the entries. We certainly found what we were hoping for with some consummately accomplished writing from some very interesting writers. Lively debate amongst the judges raised comments on wonderful language and confident characterisation and often challenged us to overcome our prejudice on what makes a novel.”
Chair of the Commonwealth Short Story Prize, Bernardine Evaristo said, “The high quality and variety of international stories on this shortlist is fantastic. To read them is to be immersed in a wide range of cultures and situations, and to be persuaded by superbly-crafted narrative voices, different ways of seeing and being, suspenseful dilemmas and intensely-rendered emotional experiences."
To mark the 25th anniversary of the Commonwealth Writers’ Prize in 2011, the Commonwealth Foundation re-launched its prizes to form part of Commonwealth Writers. The prizes act as catalysts to target and identify talented writers from different regions who will go on to inspire and inform their local communities. 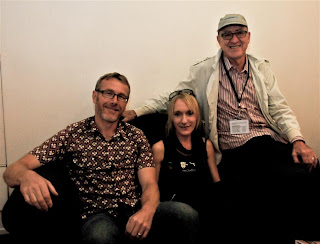 Carl Nixon and Sarah Quigley with Bookman Beattie at the Auckland Writers & Readers Festival, 2011
Posted by Beattie's Book Blog at 6:14 am