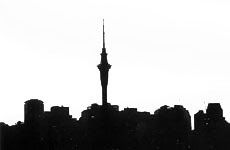 AUCKLAND WRITERS & READERS FESTIVAL 2009
My thanks.
Well the shouting and the tumult has died, the authors and their fans have all gone home along with the legion of wonderful volunteers and all that remains, and it is a big job I'm sure, is for the small AWRF team to clean up the show, pay all the bills, write hundreds of thank you letters, and attend to the one hundred and one other things that need attention, and of course advertise for a new Director, and start planning for next year's Festival!
I overheard a number of festival goers saying that this was the best-ever Festival.
I'm not sure how you can actually make judgements like that? By the audience numbers perhaps? My feeling was that this Festival certainly drew larger crowds than ever before which in these straitened economic times says plenty about the programme and the Festival's reputation for serving up fine fare.
One thing I am certain about though was that there was a buzz about this Festival that I had not experienced previously. So to the hardworking and dedicated AWRF crew, the trustees, and all those volunteers I say well done, you delivered us a fine Fesival, and you should all gain pleasure and delight from a job very well done. And may I take it upon myself to extend warmest thanks for delivering us all such spendid fare over these past four days.
And to outgoing Festival director Jill Rawnsley I say a special thank you and wish you bon voyage. It is a hugely stressful and demanding role that you have carried out with aplomb. Go in the knowledge that you have delivered the goods and come back next year and sit in the audience without having to worry at all about anything not going as planned.
Posted by Beattie's Book Blog at 9:55 am

Thanks for the fabulous blogging effort from you and Annie! This festival business if exhilarating and exhausting, and that's just for the attendees.

Congratulations to the organisers, and in particular to Jill for her dedication over so many festivals.