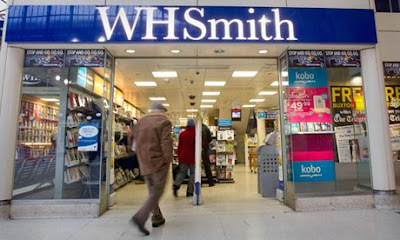 WH Smith is keeping faith in the high street after revealing a rise in profits over Christmas despite falling sales.
The retailer is planning to open about six more stores in the UK this year as better buying terms in the far east, less discounting after Christmas and a shift towards more profitable stationery products offset a 5% drop in underlying sales in the 20 weeks to January 20.

Strong sales of Christmas bestsellers, led by Jamie Oliver's 15 Minute Meals and Miranda Hart's autobiography, helped the company hold market share in books despite some heavy discounting in December which drove down book sales at the retailer by 6%. The company found £4m of savings at its high street stores, according to analysts.
"We were pleased with our performance in a tough environment," said chief executive Kate Swann. "We are in a fortunate position that we know we have got a good balance sheet and are very cash generative so can keep growing."

She said the company would continue to expand abroad and was looking at further acquisitions after making a success of Funky Pigeon, the online card store it bought three years ago.
City analysts moved up annual profits forecasts by an average £0.5m to £106m. At Swann's last annual meeting with shareholders on Wednesday before her departure from the company in June, about 50 shareholders gave her a round of applause and thanked her for keeping the company alive through 10 years of tough times.
Darren Ager of Charles Stanley, said: "Who would have thought in 2003 that WH Smith could deliver these kind of returns. The reason is Kate's attention to detail." A clearly uncomfortable Swann responded: "Thanks, let's move on."

Swann said she did not think WH Smith would see much benefit from the closure of chains including Jessops, Blockbuster and HMV, as it no longer sold CDs and DVDs. The company is adding stores in locations, such as small market towns, where it does not have any outlets.
WH Smith will spend £5m this year on expanding Funky Pigeon, which experienced strong double-digit sales growth this Christmas. Swann said the company's online business, including its main books and stationery site, would become profitable this year.

Posted by Beattie's Book Blog at 6:34 am