Events that changed the course of New Zealand history 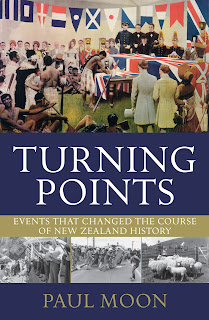 What constitutes a turning point? In his new book, leading historian Paul Moon has chosen 20 pivotal events, (half in the 20th century and half before), that have shaped the course of New Zealand history over the years. Each event is described as a discrete story and illustrated with photographs drawn from the archives, and the author outlining how New Zealand history has changed as a result.

Written for the interested layperson, the episodes run from first discovery of the land of the long white cloud to the emergence of a new electoral system with MMP. Arranged in chronological fashion, other events in the book include Hongi Hika’s visit to England, the impact of the New Zealand Company settlements, when women get the vote, the First World War, Maori migration to the cities, Britain joining the EEC, the Springbok Tour, the Homosexual Law Reform Act and the politics of Rogernomics. All of these turning points reveal the huge diversity of ideas, beliefs, and courses of action that go to make up the history of this nation.
A fascinating and highly accessible illustrated account of New Zealand history

About the author:
Dr Paul Moon is Professor of History at the Faculty of Maori Development at AUT University. He has written extensively on nineteenth-century New Zealand history and Maori history and is also a frequent media commentator and, in the past few years, has appeared on TVNZ’s Frontier of Dreams, Prime TV’s New Zealand's Top 100 History Makers, TVNZ’s Close-Up, Marae, Te Karere, and Waka Huia, TV3 News, and Māori Television as an election night analyst. He has also appeared regularly on Radio New Zealand’s Morning Report and Checkpoint, on NewsTalk ZB, Radio Pacific, and Radio Live.