Hilary Mantel's Bring Up the Bodies: a middlebrow triumph


Winning the Costa prize says much about our hard times, but more about British literary culture in the age of the Kindle 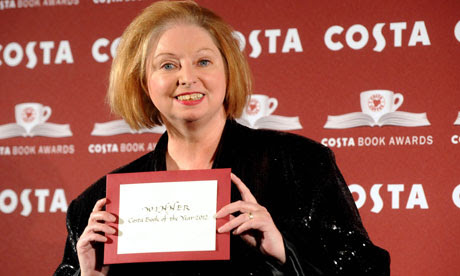 Hilary Mantel's success with Bring Up the Bodies , the second volume of a projected trilogy devoted to the life and times of Henry VIII's chancellor Thomas Cromwell, marks an unprecedented grand slam: Booker followed by Costa, with the Women's Prize for Fiction beckoning. It's an outcome that says a lot about the Costa prize, even more about the hard times in which Bring Up the Bodies has been published, but perhaps most of all about British literary culture in the age of the Kindle.

A middlebrow triumph in a distinctly odd middlebrow prize by a dedicated writer who has struck a chord with the British reading public in a way that few English novelists have, this will certainly score a footnote in the history of early 21st-century British fiction.

Mantel's only serious competition came from the immensely gifted Scots poet Kathleen Jamie's exciting collection, The Overhaul – a lovely, lyrical celebration of Scottishness and the Scots tongue. The judges would indeed have been bold to make that their final choice. Costa juries, traditionally, tend to take only the most gilt-edged risks.

Bring Up the Bodies is unquestionably the bookies' and the booksellers' favourite. In an exceedingly tough commercial climate, with the surge of the Kindle and ebook, Mantel's win will give the trade a much-needed moment of commercial relief. First and last, it's a recession beater.

Such a verdict would probably not be its author's ambition. Mantel has made her career with fiction and non-fiction of stunning originality. Naturally brave, she has been the opposite of predictable. This novel, however, is nothing if not reassuring. First, it takes one of medieval England's greatest thrillers (the persecution, trial and death of Anne Boleyn) and gives it a clever contemporary spin. Mixed with sharp, modern dialogue, the narrative exploits the historic present tense to give an essentially hardcore historical novel some extra literary pizzazz.
It also meets the demand for a cracking good read – the carefully-crafted entrapment of Boleyn and the alleged plotters is superbly told. Superior to Wolf Hall, its predecessor, Bring Up the Bodies will stimulate a feel-good factor throughout the nation's book groups.

Whether it will be read as anything more than a fascinating curiosity in years to come is another matter. Posterity is generally rather unkind towards crowd-pleasing prizewinners. And this is a prizewinner with knobs on.
Posted by Beattie's Book Blog at 6:06 am