More enthusiasm for The Rosie project 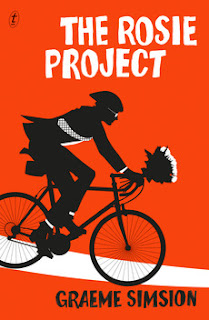 The ongoing tug-of war between Australia and New Zealand over who can claim as theirs everything from Russell Crowe to Phar Lap, pavlova, and Crowded House, just got another player. Graeme Simsion was born in Auckland, lives in Melbourne and has written one of the quirkiest, most adorable novels I’ve come across

The Rosie Project (Text, $37) is the story of Professor Don Tillman a geneticist with undiagnosed Asperger’s Syndrome (we presume) who is lonely and looking for love. Don decides to approach looking for a partner the way he does everything else in life, scarily systematically. He dubs his quest “The Wife Project” and creates a 16-page questionnaire designed to help him find the perfect, punctual, non-smoking, non horoscope-reading woman. With the help of his only two friends, Gene and Claudia, he embarks on his search.
But The Wife Project is derailed when Gene introduces him to Rosie Jarman who is everything Don isn’t looking for in a woman. Feisty, challenging Rosie shakes up his life, not only disrupting some of the strict schedules he lives by, but involving him in a project of her own, to track down her biological father.
The Rosie Project takes over, with Don devising inventive ways to obtain DNA from the possible contenders, during which he discovers all sorts of illuminating new things – from the social unsuitability of quick-dry clothing to his prowess as a cocktail waiter. Flying in the face of science, he finds himself attracted to Rosie, and soon is abandoning routines, attempting to make jokes and even rethinking his wardrobe.
The Rosie Project began life as a screenplay that business consultant Simsion then turned into a novel. Now being published in thirty countries around the world, it’s poised to become one of the year’s bestsellers and deservedly so. This is a fresh, funny story, written with verve and great timing.
So is it politically correct to joke about Asperger’s Syndrome? I suspect not but Simsion pulls it off anyway, partly because the book has so much heart but mainly because Don Tillman is such a fantastic, lovable, geeky character that you’re cheering for him from page one.
Simsion never officially labels Don as an “Aspie”, saying he wanted readers to approach the character as a complex person rather than a set of symptoms – a smart move and it’s worked. Socially awkward, dysfunctional, vulnerable; there’s a little bit of Don in all of us.
There are messages here about society’s intolerance of those deemed “different”, about our need for companionship no matter who or what we are and how love can defy logic, but all are delivered in a way that’s comic and caring, rather than carping.
I loved The Rosie Project. It’s an entertaining read from start to finish, thoughtful and fun, very different and utterly charming, a brilliant first novel from a mature, clever writer.
If you ask me we should lay claim to Graeme Simsion and let Australia keep Russell Crowe. 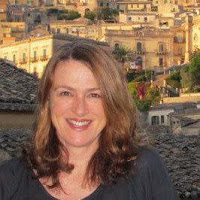 Nicky Pellegrino,(right), an Auckland-based author of popular fiction, is also the Books Editor of the Herald on Sunday where the above review was first published on Sunday 27 January, 2013.
Her latest novel When In Rome is set in 1950's Italy and was published in September 2012.

Footnote 2:
Mark my words we are going to hear a lot more about this author. This book (publication this Wednesday) is one of the funniest and most enchanting books I have read in a long while, and I totally agree with Nicky Pellegrino's assessment. Don't miss it, wonderfully entertaining, absolutely brilliant.
Posted by Beattie's Book Blog at 6:31 am

We keep Phar Lap too.