German row over whitewashing the n-word from children's books 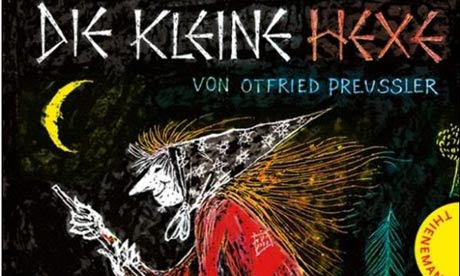 Detail from the cover of Thienemann's new edition of The Little Witch. Photograph: Thienemann

A German man whose letter to a publishing house prompted it to expunge the racist sentiment from a classic children's book has spoken of his relief that about the decision, despite the angry backlash and hate mail it has generated.

Mekonnen Mesghena wrote to one of Germany's oldest children's publishers urging it to revise the text of Die Kleine Hexe (The Little Witch) after stumbling across a passage in which two children dress up as "neger", which can be translated from German as both "nigger" and "negro". "I am hugely relieved to have been told that all the words to do with the skin colour will be abolished," he said.

Mesghena wrote to Thienemann Verlag after realising that he could not continue reading the book to his seven-year-old daughter, Timnit, one bedtime. "Suddenly it was full of racist language referring to little niggers and gypsies and basically a lot of labelling of people. I was not prepared. Normally if you come across a problematic word you can change it, but this was a whole chapter so I simply had to stop reading, much to the disappointment of my daughter," he said.

But the decision has caused an outcry amongst many of the country's intellectuals, who have accused Thienemann of censorship and of unnecessarily meddling with a beloved classic. Both Thienemann and Mesghena have been inundated with angry correspondence, even hate mail.

Full article
Posted by Beattie's Book Blog at 5:44 am

One more example of 'political correctness' going too far - why cant period writings be recognised as reflecting the values and perceptions of the time they were written without such meddling?