Haul Out the Haggis, It's Time to Celebrate Burns Night 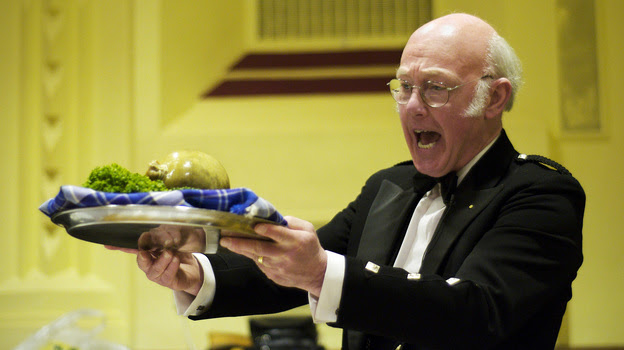 Before serving the haggis at a Burns Supper, it's tradition to address it by reciting Robert Burns' "Address to a Haggis" which begins "Fair fa' your honest, sonsie face, Great chieftain o' the pudding-race!"
sneeu via Flickr

Don't fear the haggis. Just think of it as a big, round sausage. That's what it is anyway.
Haggis is Scotland's national dish and every year on (or near) Jan. 25, it plays the starring role in Burns Suppers held around the world in celebration of the Scottish poet Robert Burns on his birthday.
Technically, it's the heart, liver and lungs of a sheep mixed with suet, oatmeal and seasoning and boiled in a bag. Yes, said bag was traditionally the sheep's stomach, but modern haggises are frequently prepared in sausage casing. It's much tastier than you might think. As one Scottish friend puts it, haggis is "a dish that makes the worst-sounding combination of meat taste fantastic."
It's central to the Burns Supper, paraded into the room on a silver platter and accompanied by bagpipes. Before cutting and serving haggis, a designated guest first addresses it, reciting Burns' poem of appreciation for the "Great chieftain o' the pudding-race." In a mock heroic style, the verse describes the haggis as worthy of grace and a glorious sight, tasting better than a French ragout or fricassee, and that "if ye wish her gratfu' prayer, Gie her a Haggis!" 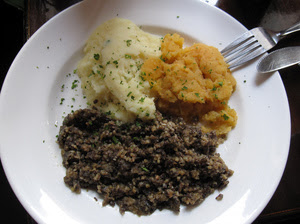 Haggis is traditionally served with mashed neeps and tatties, or turnips and potatoes.
Bernt Rostad via Flickr

With his "Address to a Haggis," Burns elevated the worth of a peasant food. "Haggis was really a meal of the working man – the people who didn't have much – because when a sheep was killed, they would cut it up and use everything," says Tony Grogan, president of the Robert Burns Association of North America and a Scottish ex-pat.
For the first recorded Burns Supper, which occurred on July 21, 1801, the fifth anniversary of the poet's death, nine of his friends gathered to eat and toast the poet. The meal featured haggis as well as sheep's head, now out of style. Celebrations were held twice a year on both his birth and death date from then until 1809, when admirers eventually settled on his January birthday.
Modern-day Burns Supper menus stick to tradition, and regularly consist of other funny-sounding Scottish favorites like cock-a-leekie soup, made of chicken and leeks, for a starter, and clootie dumpling — a pastry with dried fruits. And you can't have the haggis without the neeps and tatties (turnips and potatoes) alongside. Then if you're lucky, there's cranachan made with oats, cream, Scotch whisky and raspberries for dessert.
Full article
Posted by Beattie's Book Blog at 3:33 pm