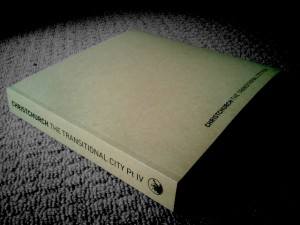 Christchurch: The Transitional City Part IV documents 149 transitional and temporary projects that have occurred in Christchurch since the earthquake. It demonstrates the various responses to the destruction caused and the myriad of ways in which the people of Christchurch have tried to reconstitute the city during extraordinary times.

The book profiles Christchurch’s transformation through a range of different projects including: acts of protests, bars, artworks both legal and improvised, the temporary stadium, the pop-up mall, community constructions, Gapfiller, the 100 Day Plan, educational facilities, cafes and many more. From the large scale project to the small community gesture, each endeavour is given equal treatment in this historically and culturally important book.

The contributors range from businesses, communities and artists, through to corporates and grass-roots associations. It is the first book to compile the creative and diverse responses that brought about so many important projects and a new way to experience the city in the wake of loss.

Each project is presented in a two-page spread that includes marvellous full colour photographs. By cataloguing what is happening in Christchurch today, the book also serves as guide to a creative rediscovery of the city.

Don't be put off by probably the plainest cover I have ever seen on a book, delve inside and you'll be captivated. This is a significant, inspiring piece of publishing, something to treasure especially by all whom have been affected by the Christchurch earthquakes, but also to the wider NZ community. I shall value my copy.

Christchurch: The Transitional City Part IV has been published and put together by Freerange Press, which claims to be New Zealand's first co-operative publisher.
After the success of their limited edition first print run (printed with the aid of The Warren Trust), they have printed a second edition, which is now available.


Here is a piece from the book's introduction:
"Post-quake Christchurch is deeply disorienting. Since the major earthquake of February 2011, 80% of Christchurch’s central city building stock has been removed, and around 4,000 houses have been or will be demolished, leaving large windswept lots full of phantoms. In the leafy suburbs of Christchurch west and south the seasons pass, with road works and distant sounds of machinery the main reminders of the quakes. But the centre of Christchurch and the suburbs out east tell another story.
If you are, or were, familiar with the city, you may recognise the street names and intersections, but the places are completely changed. You stand there, staring, struggling desperately to remember, struggling to articulate meaning out of the uncanny familiarity.
There is also novelty in the ruins, in the strangely uplifting play of light in places it never occurred before. This new light illuminates different ways of seeing the city and its future. The light provokes a spontaneous need to talk about what might come as the memory of what has been lingers like the fragments of a dream. You move around, taking mental pictures of landmarks fast disappearing, trying to picture what is already absent. It’s a creative process. It has you babbling to your neighbour about what we valued before and how we might reconsider values in our search for a new sense of place, with our few precious pieces of heritage anchoring the search for a shared sense of turangawaewae.
Like the poem in which Rilke marvels at the fractured torso of Apollo in the Louvre, an appreciation of the beauty and play of light of a ruin can be the foundation for new understanding and change for the better:
For here there is no place that does not see you.
You must change your life.
You can’t stand in the middle of Christchurch and not feel the chaotic reality of life – its movement and transience. You cannot stand there and feel untroubled. It is profoundly unsettling to see these streets, buildings, and memories shaken into small parts by the twin forces of natural earthquakes and man-made economics, loaded up into trucks and dumped into great mounds near new subdivisions.
You see things that were once hidden: empty sites and broken foundations, flows of material, networks of support, threads of power. The imperative - you must change your life - is emancipatory, and for a brief moment you revel in the excitement of enforced newness and freedom. "

Some examples from the book: 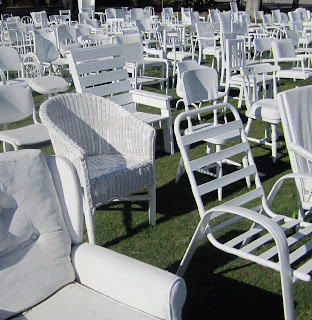 where did the project happen?
On the site of the Oxford Terrace Baptist Church, corner Madras St and Oxford Tce, Christchurch City.
what if any organisation created the project?
Side Door Arts Trust.
who were the main people who worked on the project?
Peter and Joyce Majendie.
what other organisations were involved?
Oxford Terrace Baptist Church, Opawa Baptist Church.
what professions/disciplines worked on the project?
Painting, landscaping - all done by volunteers. Lighting by Spectrum.
how many people were involved in creating the project?
30+ painting chairs, laying ready lawn etc.
public start date or month:
22 February 2012.
how long did it take to organise?
Two months.
how long did it last for?
Still going.
how long is it planned to last for?
Hopefully through to 22 February 2013.
how much did it cost?
A few thousand plus ongoing costs for lighting etc.
did the project require consents or planning permission or other?
Only from Oxford Terrace Baptist Church - no Council consents required as it is on private land.
project description:
A temporary art installation reflecting on the loss of lives, livelihood and living in our city following the earthquake on 22 February 2011. One hundred and eighty five square metres of grass depicting new growth, regeneration. One hundred and eighty five white chairs, all painted twice by hand as an act of remembrance, each one different. This installation is temporary – as is life. 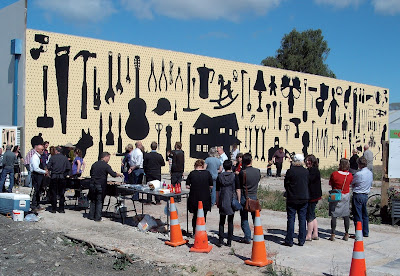 I SEEM TO HAVE TEMPORARILY MISPLACED MY SENSE OF HUMOUR

where did the project happen?
Colombo St, Sydenham.
what if any organisation created the project?
Christchurch Art Gallery, Gap Filler.
who were the main people who worked on the project?
Wayne Youle, army of CAG technicians.
what other organisations were involved?
Resene, David Wagner and Wagner Holdings, B&F Papers, Mike Jones and VINZ Sydenham.
what professions/disciplines worked on the project?
Wayne - artist. CAG technicians, Justin Paton - CAG curator.
how many people were involved in creating the project?
Ten.
public start date or month:
December 2011.
how long did it take to organise?
Four months.
howlong did it last for?
Ongoing.
did the project require consents or planning permission or other?
Wall owner’s permission.
project description:
‘I seem to have temporarily misplaced by sense of humour...’ is by New Zealand artist Wayne Youle and is a collaboration between Gap Filler and The Christchurch Art Gallery.
The giant artwork took shape over a few weeks in December, 2011 with scissor lifts, hundreds of litres of paint, stencils galore, technicians and more working whenever the weather was good! The mural is 37m long and according to Art News (Summer) quite possibly New Zealand’s largest painting.
Inspired by memories of his grandfather’s workshop, Wayne has designed a huge shadowboard like those found in sheds and garages everywhere. Alongside hammers and other tools, Wayne’s board contains some familiar but unexpected things – like houses, toys and wedding rings. Wayne says: “This mural is for all those who lent their tools and their hands to all who needed help. Also to all those that lost something in the quakes, no matter what that something may have been. Don’t lose your sense of humour and ability to smile. 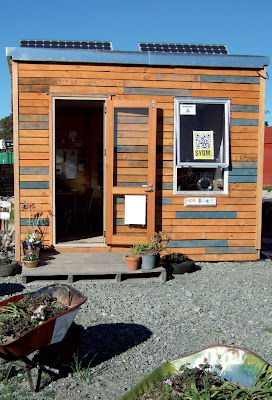 where did the project happen?
404 Colombo St, Sydenham.
what if any organisation created the project?
Sustainable Habitat Challenge (SHAC), Dunedin; Gap Filler.
who were the main people who worked on the project?
Tim Bishop, Trent Hiles.
what other organisations were involved?
Steel and Tube, Pump House, Dulux, Clyde and Bennie, Skelly Holdings, Southern Demolition, Window Marketplace, Terra Lana, Addington Demolition, The Press and Christchurch Demolition and Salvage.
what professions/disciplines worked on the project?
Builders, architects, plumber.
how many people were involved in creating the project?
20.
public start date or month:
21 January 2012.
how long did it take to organise?
Three months.
how long did it last for?
Ongoing.
did the project require consents or planning permission or other?
Permission of landowners, no building consent required.
project description:
A sub-consent structure built from recycled and ex-demo materials on a vacant site by volunteers. It is the Gap Filler office!