Sorry! The English and Their Manners by Henry Hitchings – review 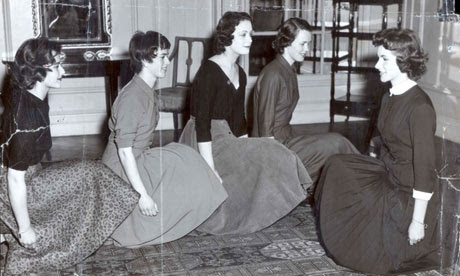 Susan Hampshire, right, demonstates how to curtsey before the queen, 1956. Photograph: Alamy

Henry Hitchings, the Evening Standard's theatre critic, has been suffering from a mild case of anglophilia for some years. The first symptoms appeared with his study of Dr Johnson's dictionary, followed by two well-received books on the by-ways of the English language (The Secret Life of Words and The Language Wars). Now, he has succumbed to a full-blown case of anglomania, a study of English social behaviour through the ages whose title – Sorry! – suggests that he knows his affliction is both contagious and untreatable.Any treatment, indeed, might be more dangerous than the cure. Hitchings's subtitle, "The English and Their Manners", indicates that he has also contracted a virulent side-effect, the agonies of the "British" question. The catalogue of commentarians who have been driven to the edge of insanity by this topic is long and distinguished. George Orwell, no less, grappled with it in his 1941 essay "The Lion and the Unicorn". Orwell noted that "we call our islands by no less than six different names", concluding with a celebration of "muddle". Hitchings, defining the territory of his investigation as best he can, acknowledges this historical difficulty, but declares that "English" rather than "British" manners acknowledge "something visceral".
Intestines, however, are also slippery. Some years ago, the Times sponsored a campaign for a British motto to rival France's Liberté, égalité, fraternité. All hell broke loose. Readers' suggestions included "Dipso, fatso, bingo, asbo, Tesco", closely followed by "No motto please, we're British". With this subject, a raised eyebrow can be as meaningful as a national mission statement.

The English have never ceased to find themselves, and the complexities of their island inheritance, fascinating. The question of "Englishness" has been a literary genre at least since Daniel Defoe made his tour of Great Britain in 1724-27. The best parts of Sorry! are when Hitchings re-examines the English "manners" of, for example, Samuel Pepys, Lord Chesterfield, who invented "etiquette", Edmund Burke, or Fanny Trollope (Anthony's mother) and her entertaining strictures about the vulgarity and self-belief of Americans.

The past is another country. As his exposition of English manners, and why we behave the way we do, approaches the present day, the rigour of Hitchings's absorbing analysis starts to break down as he becomes distracted by myriad contemporary issues and concerns, ranging from telephone etiquette (mobiles at the dinner table?), to supermarket manners (ogling a neighbour's shopping trolley). Hitchings the journalist moves his centre of gravity from the library to the field. His research becomes impressionistic and personal (a cafe in the West Midlands; a restaurant in Egypt; childhood memories from the 1970s and 80s; vox pops with young people). Hunting a moving target becomes a game of pin the tail on the donkey.

The paradox of English life is that ours is a small-c conservative, broadly democratic society founded on chaos, privilege and snobbery. Our political class emerged from the mother of all invasions by a foreign power. Our national church was created by a royal divorce case. Our famous monarchy derives from regicide and civil war. As an insular society, Britain's public face is often provincial, though its history is uniquely global. The English, in other words, are a complicated people whose "manners" can be simultaneously coarse and sophisticated, both staggeringly rude as well as astoundingly polite. Everything one says about them is true – and so is its opposite. Reconciling a long history of disruptive, sometimes thrilling, social expression with a scholarly appetite for themes will always be problematic for the historian. Hitchings has made a bold, entertaining, and often imaginative, assault on a fundamentally impossible subject. Perhaps in writing Sorry! he will have found a cure for his affliction.
Posted by Beattie's Book Blog at 6:45 am