Bought for £1, the mysterious tower that inspired JRR Tolkien 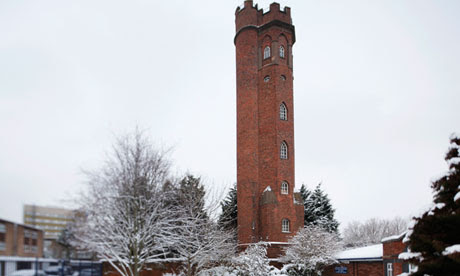 Perrott's Folly in Edgbaston offers views over where JRR Tolkien lived and went to school. Photograph: David Sillitoe for the Guardian

It wasn't the most promising of pitches: when Ben Bradley suggested that a homeless charity buy a derelict, windblown Georgian tower in a poor district of Birmingham he expected, and got, some blank looks.
The building is spectacular but perilous. It sways slightly in strong wind and its seven rooms – one on each storey – are the size of a hearth rug. But, said Bradley: "As it turned out, my CEO is a Tolkien fanatic, and so the deal was done."

The Trident Reach the People charity paid £1, and became proud owners of one of the oldest and most eccentric structures in Birmingham, a building better known in Japan than it is on the other side of the city.
The eyeball-shaped windows at the top of Perrott's Folly look down in one direction on where JRR Tolkien lived as a child, and in the opposite direction on the Oratory, where he went to school. It also gives a spectacular view of the other tower he passed twice a day, the gothic ornamented chimney of the Edgbaston waterworks, which in the writer's day would have belched smoke from the steam engines. To Tolkien true believers, there is no point looking further for the origins of the two sinister towers that loom over the world of his Lord of the Rings.
The folly stood at the heart of a magnificent park when it was built by a local eccentric, John Perrott, in 1758. The pragmatic explanation is that it was a hunting lodge and status symbol, but legends insist he built it to look yearningly at his wife's grave 15 miles away, or that when she was alive it allowed him spy on her trysts with her gamekeeper lover. Conspiracy theorists point to the Masonic symbols in the ornate plasterwork of the top room, and there are tales of secret passages and underground chambers.

Full piece at The Guardian
Posted by Beattie's Book Blog at 6:15 am