Every now and again a book of such beauty comes along that it makes my heart sing. This is one such book. What a cracker, utterly gorgeous, I am delighted and privileged to own a copy. Among all the beautiful art are reproductions of many of Peter Campbell's stunning  London Review of Books front covers. 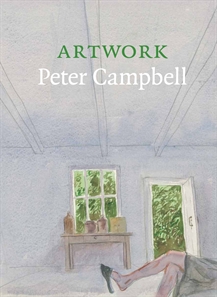 A retrospective in association with the London Review of Books.

Peter Campbell was the resident designer and art critic for the London Review of Books. He worked for the magazine from its first appearance in 1979 and wrote more than 300 pieces, mainly about art but also about such things as escalators, weeds, bicycles, bridges and hearts. Each fortnight from 1996 onwards, Peter created a cover illustration for the LRB, coming up with a seemingly infinite array of unpredictable images: a yacht and a starfish, a tram, two knickerbocker glories, a game of dominoes, a man walking past a lighted window at night. The immediate freshness, colour, playfulness and surprise of these covers belied their technical skill, erudition and command of detail and artistic reference.

Peter Campbell designed and edited BBC books by Kenneth Clark, Jacob Bronowski and David Attenborough. He worked often with Quentin Blake and wrote the introduction to Blake's The Life of Birds. He worked, too, on several books by his fellow LRB contributor Alan Bennett.
He described the LRB job as perfect for him and his 'absurd good fortune'. It allowed his talent and years of expertise to come together. Artwork is a collection of Peter's finest works over the years.

About Peter Campbell:
Peter Campbell was born in Wellington in 1937, in a taxi in the Hataitai tunnel. He attended Victoria University in Wellington, graduated in 1958 with a degree in philosophy and in 1960 married fellow student, Win Doogue. He and Win then boarded the MS Willem Ruys for the month-long voyage to Britain. He lived for the rest of his life in London, but kept a New Zealand ease and way of seeing. Peter is survived by Win and their children, Jane and Ben.

The gallery exhibit dates for Artwork: Peter Campbell are: