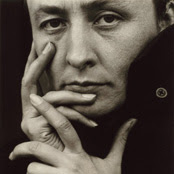 Many associate famed artist Georgia O’Keeffe with her oft-reproduced images of flowers in full bloom. But a new exhibition at the Whitney Museum of American Art, the first of its kind in a quarter-century, attempts to change that perception. The team of curators who chose the approximately 130 oils, watercolors, charcoals, and sculptures for Georgia O’Keeffe: Abstraction, on display until January 17, were determined to show O’Keeffe’s depth, finding works that feature a clamshell or hot pink kiss instead of her familiar floral paintings.

The exhibition’s catalogue reveals steamy letters detailing O’Keeffe’s encounters with photographer Alfred Stieglitz, and left sealed until their recent publication, they can be read in part on The Daily Beast. Stieglitz was often the lens through which O’Keeffe saw herself, taking photographs of the artist with her paintings as well as intimate nude portraits, some of which appear in the exhibition. Judith H. Dobrzynski writes that the shockingly frank images “led critics to see eroticism in her works where, [O’Keeffe] said, she had not intended it.”