Two cultural trailblazers have been awarded one of the country’s richest non-fiction literary prizes in the toughest competition since the inauguration of the Copyright Licensing Awards eight years ago.
Critically acclai

med novelist, essayist and film-maker, Peter Wells MNZM was tonight awarded one of the $35,000 CLL Awards to write The Hungry Heart: The Enquiring Mind, a book of biographical essays on William Colenso.
CLL Writers’ Awards judges’ convenor, Jenny Jones says Wells’ project is a daring re-examination of William Colenso’s life.
‘The selection panel believed not many writers would attempt an almost poetic portrayal of the emotional man at the foundation of this country’s colonial history.
‘Far from a conventional biography, this book will be an essay series that examines Colenso as an intellectual maverick who, among other things, was opposed to the signing of the Treaty of Waitangi.’

The award confirms Wells as an artist committed to change in New Zealand society, be it through documentaries, archiving at-risk architecture (Napier's Art Deco or Auckland's Civic Theatre), producing one of the earliest pieces of fiction in which a gay author published under his own name, or writing and co-directing dramas like 'A Death in the Family' which was produced at the height of the HIV-Aids crisis and looked at the ways stigma works in families and society. 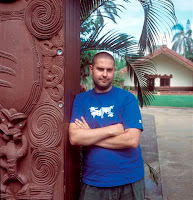 Writer and curator Damian Skinner received the second $35,000 CLL Award for his project, The Hands of the Ancestors: Customary Māori Carvers in the Twentieth Century.
Skinner, a Pakeha born in Central Otago, now lives with a Māori family in Gisborne. He has been researching and writing about customary Māori art since the early 1990s.

Jenny Jones says the renaissance of Māori carving in the 20th Century is usually credited to Apirana Ngata’s Rotorua School of Māori Arts and Crafts. Damian Skinner proposes a more subtle and varied explanation of this, one of the great New Zealand stories of our time.
‘The rescue of Māori carving by the few is a huge part of the Māori renaissance. Damian Skinner promises a book covering new and exciting dimensions to that story.’

The Awards were presented at a ceremony at The Floating Pavilion, Auckland’s Viaduct last evening.

Peter Wells won the New Zealand and Reed awards for fiction with his first short story collection, Dangerous Desires (1991). He is equally known as a film and television director and scriptwriter, most notably for A Death in the Family (1986) and for the feature film Desperate Remedies (co-written and directed with Stewart Main), selected to screen at the 1993 Cannes Film Festival.
He is a co-director (with Stephanie Johnson) of the Auckland Readers’ and Writers’ Festival.

Wells was joint winner (with C.K. Stead) of the 1999 Landfall essay competition. His memoir, Long Loop Home (2001) won the Biography Award in the 2002 Montana New Zealand Book Awards.
His most recent book, Lucky Bastard (2007) was critically acclaimed.
In 2006 Peter Wells was made a Member of the New Zealand Order of Merit for services to literature and film.

Writer and Curator Dr Damian Skinner’s work in the area of New Zealand’s art history is prolific and frequently critically acclaimed. Since his Ph.D thesis: Another Modernism: Māoritangi and Māori Modernism in the 20th Century (2006) he has written or co-written a further seven works including Don Binney: Ngā Manu, Ngā Motu/Birds, Islands (2003), Alan Preston: Between the Tides (2008) and Ihenga: Te Haerenga Hou – The Evolution of Māori Art on the 20th Century (2007). His most recent book, published this year and co-authored by Moyra Elliott is Cone Ten Down: Studio Pottery in New Zealand 1945 -1980.

Being a Pakeha, Damian Skinner walks the fine line in researching and writing about customary Māori art. Inspired by master carver - Tuti Tukaokao, the subject of his Ph.D - Skinner says when writing for a Māori audience he is conscious of his responsibility and thinks that it has made him a better, more careful writer.

Born in Cromwell, Central Otago – Damian Skinner now lives in Gisborne with a Maori family; a couple and their two children.
Posted by Beattie's Book Blog at 6:44 am