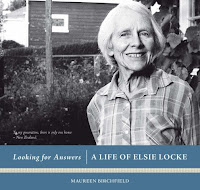 This is a work of great research and scholarship of which the author and her publisher should feel immensely proud. Elsie Locke was a great New Zealander but one who seems to be largely unknown outside the various communities in which she played such a prominent part.
Here is her second son, Keith, speaking at her funeral in April 2001:
The truth needs to be told that my Mum made a major contribution to New Zealand’s cultural, social and political life in as many areas – different areas – and over as long a time as any other New Zealander. There are certainly no more than a handful, like Sir Apirana Ngata, who could match her for her range of work, contribution, and persistence….”

Keith Locke is spot on in these comments. This handsome large book then tells the life story of a woman who helped shape New Zealand history but went largely unrecognised during her lifetime
It is the compelling biography of a writer and activist who campaigned for birth control, women’s rights, nuclear disarmament, social justice and the environment long before such causes were popular.

She wrote almost 40 books, including historical novels for children and social histories of New Zealand, plus numerous articles and School Journal stories. She won many awards for her writing over the years and in 1987 the University of Canterbury awarded Locke an Honorary Doctorate of Literature for her work in children’s literature and history. Pic right shows Elsie at a book launch in 1988.
It was in her capacity as an author of children's books that I came across her and while I only knew her slightly I admired her enormously. Perhaps her best-known children's title The Runaway Settlers has become a New Zealand classic. There are over 20 references to this title in the book's impressively comprehensive index.

Biographer Maureen Birchfield said she was invited to write the book by the Locke family because of the family connection through her parents, Connie and Albert Birchfield, who were friends and fellow members of the Communist Party from the 1930s to mid-1950s. She said she accepted because of her “conviction that this was a very important life story that needed to be written”.
“I thought Elsie was a pretty impressive person before I began discovering more about her through my research. Then the more I discovered the more admiring of her I became.”
Ms Birchfield said had Locke been alive to see the biography, she probably would have been embarrassed by it, being a private and modest person. It reveals the central role Locke played in the organisations she was involved in.
“She always downplayed her involvement and gave centre stage to other people rather than herself. She liked to be called ‘ordinary’ but she really was extraordinary and a pioneer in many ways.”

Ms Birchfield said because Locke was so multi-dimensional in her interests her story would appeal to a wide audience.
She said readers of Looking for Answers would learn about a “low profile but very important New Zealander and through her about the social and political scene in New Zealand from the 1930s Depression to the 21st century”.
“It is also an inspiring story of how an ‘ordinary’ working class woman can achieve so much at grass-roots level.”

Ms Birchfield spent five years researching and writing the book incorporating much of Locke’s unfinished memoir. She also drew on primary sources such as minutes of Communist Party meetings, personal letters, archives of organisations and movements, articles in long-forgotten journals, and memories and insights from Locke’s family and friends. She has also incorporated declassified information, released by the New Zealand Security Intelligence Service “at the eleventh hour”.

Looking for Answers: A Life of Elsie Locke was launched on 18 September at a function hosted by Elsie’s son, Green Party MP Keith Locke, at the Grand Hall at Parliament. Associate Professor of History, Charlotte Macdonald from Victoria University of Wellington, a specialist in New Zealand and women’s history, launched the book.
The book will also be launched in Christchurch on 7 October at the Great Hall of the Arts Centre by Dr Len Richardson and in Auckland on 30 October at the Women’s Bookshop in Ponsonby.

The book has been published with the support of Creative New Zealand and the New Zealand History Research Trust Fund of the Ministry for Culture and Heritage.
The book is crammed with most interesting photos. The pic left shows the Locke cottage at 392 Oxford Terrace, Christchurch.
Other shots I especially enjoyed were one showing Margaret Mahy and Elsie Locke at the 1989 Women's Book Festival and another showing Elsie with other recipients of honorary doctorates from the Univeristy of Canterbury in May 1987 - Sir Wallace Rowling, Dame Jean Herbison and Sir Ivor Richardson.
Posted by Beattie's Book Blog at 2:58 pm