Presidential Confidential: Bill Clinton After Hours
By MICHIKO KAKUTANI writing in The New York Times, September 24, 2009
In an interview near the end of his two terms in office Bill Clinton talked about wanting to “demystify the job” of being president. “It is a job,” he declared, and “there’s a lot to be said for showing up every day and trying to push the rock up the hill.” His folksy, down-home style of campaigning and his lackadaisical 2004 memoir “My Life” promoted this accessible view of the presidency, as does “The Clinton Tapes,” a book based on nearly 80 conversations recorded during his years in the White House with his longtime friend Taylor Branch. 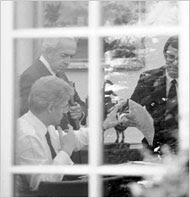 Left - President Clinton in 1994 with his advisers Bruce Lindsey, right, and Lloyd Cutler.
THE CLINTON TAPES
Wrestling History With the President
By Taylor Branch
707 pages. Simon & Schuster. $35.
This messy, longwinded volume — which is less interesting for its tidbits of news than for its overall picture of a presidency — leaves us with an intimate portrait of the commander in chief hanging out with an old pal, occasionally posing for history, but more often using Mr. Branch as a late-night sounding board and stenographer. Sometimes while multitasking — watching TV, doing crossword puzzles or rearranging his books — the president free-associates, moving from detailed analyses of intractable diplomatic imbroglios to blustering rants against the press, from meandering talk about golf or old grievances to revealing asides about other politicians and foreign leaders, like the Russian president Boris Yeltsin, whom Secret Service agents reportedly found late one night drunk in his underwear looking for a cab on Pennsylvania Avenue so he could get a pizza.
The book depicts Bill and Hillary Clinton as sharing a close, easy domesticity, often mentioning the first lady, dressed in a bathrobe, padding in to chat or review the day with her husband. At the same time the book reinforces the view of many reporters and former administration insiders, who have hailed Mr. Clinton as a brilliant retail politician and masterly policy wonk while contending that his presidency was hobbled at times by his indecisiveness, lack of focus and tendency to lurch from crisis to crisis.
As in a host of earlier books and articles Mr. Clinton emerges in these pages as driven, charismatic, boyish, brainy, self-indulgent, prescient, given to dark moods and yet remarkably resilient and eager to please, a politician riven by contradictions and adept at compartmentalizing different parts of his life, by turns empathetic and profane, defensive and oddly passive. We learn that he wrote the sections of his autobiography dealing with the two terms of his presidency in a startling three months, rather than ask for a deadline extension (which explains why those sections feel so perfunctory and rushed). And we learn that he accepted part of the blame for the failure of health care reform because he felt, in Mr. Branch’s words, that “he had pushed change too rapidly for voters to digest.”
NYT.
Posted by Beattie's Book Blog at 8:24 pm